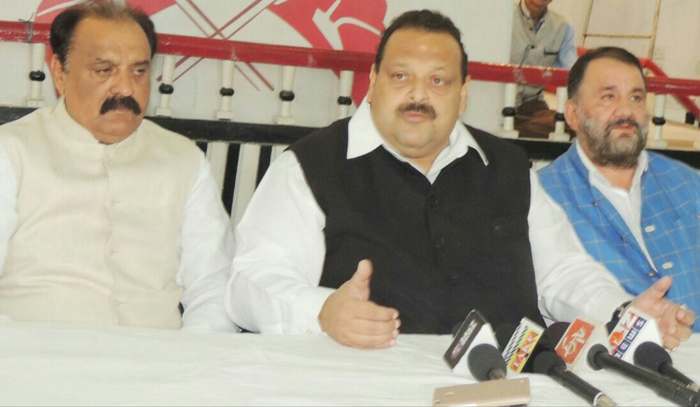 JAMMU NOVEMBER 3: National Conference on Thursday slammed PDP-BJP dispensation for failing in timely evacuation of border dwellers along Internationl Border and Line of Control, resulting in death of eight civilians, including four of a family in Ramgarh Sector.

“The State Government owes an explanation for abdicating its responsibility in shifting people to safety despite reported warnings by armed forces in the wake of large-scale shelling from across the border”, Provincial President Devender Singh Rana said while addressing a press conference at Sher-e-Kashmir Bhavan this morning.

Rana narrated woes and miseries of the people they met during their extensive visit to the forward areas, especially Ramgarh Sector and said the panic stricken residents were clueless about any arrangement made by the State Government.

“We could see some socio-religious organizations looking after and providing food in temples to the dislocated people with administrative machinery missing from the scene”, he added.

The Provincial President said the situation is extremely volatile on borders and the recent killings have left the entire population in panic and psychologically wreck in entire belts of the LoC and International Border. For the first time, he said, heavy mortars were rained in Mendhar town and habitations got devastated. In this context, he made a mention of Ghali Mandi in Poonch district and said the entire market place got burnt due to shelling and none from the administration visited the area so far.

Rana said the BJP’s indifference towards border people can be gauged from the fact that lofty promises of allotting five marla plots besides constructing shelter sheds and bunker turned out a big joke, nothing has been done so far. “Had any of these measures been taken, the civilians would not have perished in the ongoing border skirmishes”, he said, adding that the BJP stalwarts only know how to create jingoism and show bravado. He said the jingoism and bravado over surgical strikes for political purposes ahead of UP and Punjab elections is highly deplorable.