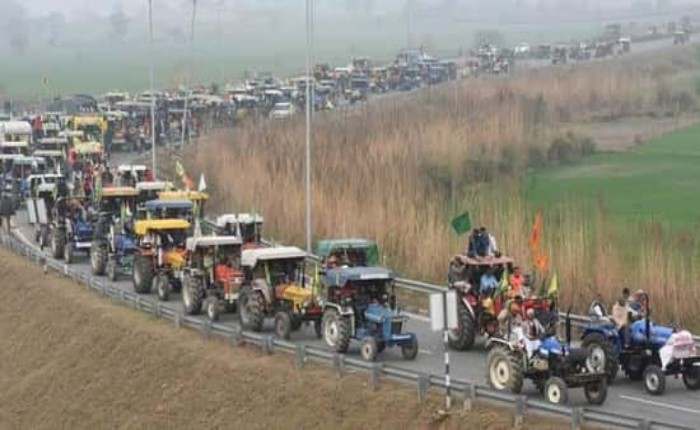 As thousands of farmers have started marching towards Delhi borders to participate in the tractor rally on Republic Day, agriculture organisations have decided to hold similar parades at state and district headquarters across the country.

Thousands of vehicles from across Haryana, Punjab, the Terai region of Uttarkhand and western Uttar Pradesh started leaving for Delhi’s borders for the tractor rally, leading to heavy traffic on various roads, including the busy Delhi-Amritsar, Delhi-Jaipur, Delhi-Meerut highways.

Traffic police officials in the four states mentioned above said several arterial roads leading to the national highways towards Delhi were choked with a huge number of vehicles as no directions had been issued to stop them. “I belong to a farming family and I decided to take my two children to Delhi for this historic parade,” said Ritu Rani, who drove a tractor from Chandigarh and was stuck at Bastara toll plaza in Karnal.

Although farm leaders such as Haryana Bhartiya Kisan Union (Charuni) president, Gurnam Singh Charuni, had appealed to farmers not to bring trailers, the farmers en route to Delhi said they were taking the trailers along as they will stay in Delhi until the laws are withdrawn. In Haryana, farm bodies have not planned any parade in the state as the focus is on the Delhi rally. However, farmers in Punjab would hold protests at nearly 100 locations. “We want the maximum number of farmers from Punjab to reach the Singhu, Tikri and other borders of Delhi along with their tractors and those who have stayed back should take part in the ongoing protest at the ongoing locations,” said Sukhdev Singh Kokrikalan, a general secretary of the Bharatiya Kisan Union (Ekta-Ugrahan), the farm body that has the highest number of members of all the bodies spearheading the stir.

From villages in western Uttar Pradesh, thousands of tractors had already left for Delhi, farm leaders said, even as the state police tried to persuade them not to participate in the rally. “We had evolved a formula of 1 village, 1 tractor, 11 persons from a village to support the movement,” Bharatiya Kisan Union youth wing state president Digamber Singh said. Chaudhary Diwakar Singh, national vice president of BKU (Bhanu), added they have aimed for 500,000 tractors to participate in parade.

At some places, police issued prohibitory orders to prevent any violence on Republic Day. Inspector general of police of Meerut range Praveen Kumar, who is camping in Ghaziabad since the beginning of the agitation, met farmer leaders and denied that police were preventing them from reaching Delhi. The statement came after media reports said farmers were being denied the purchase of diesel at some places in Uttar Pradesh; police said there were no such orders in place.

Close to 1,500 tractors with farmers from Uttarakhand will reach Delhi for the January 26 protest. Many have reached Haridwar and Uddam Singh Nagar districts. Farmer leader Vikas Chaudhary said from all the blocks of Haridwar district, farmers on tractors will be gathering at Narsain on Monday and then leave for Delhi in groups.

Several farmer, Dalit and worker groups in Karnataka are expected to take part in rallies across the state to express solidarity with proposed RD parade in Delhi. “We are going to take out a rally in Bengaluru and are expecting around 25,000 vehicles and even bullock carts. People will enter the city from all major roads leading into Bengaluru,” Kuruburu Shanthakumar, president of the Karnataka State Sugarcane Growers’ Association said on Sunday, adding similar protests would be held in Belagavi and Bagalkot also.

In Tamil Nadu, farmers and labour unions will take part in the Republic Day tractor rally in various districts across the state. “Tractors, bullock carts and two-wheelers or whatever vehicle we get, we will carry out a parade,” said AIKSCC state coordinator K Balakrishanan.