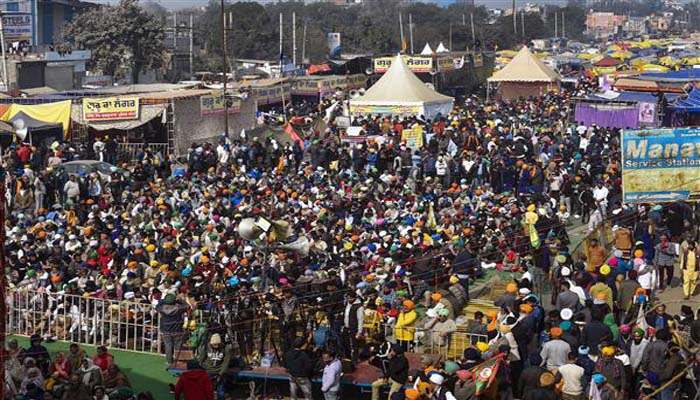 Farm unions have called for a three-hour nationwide highway blockade on Saturday afternoon to mark their protest against internet bans near demonstration sites and their alleged harassment at the hands of authorities among other issues. The protesting farmers, who have been agitating against the Centre’s agricultural laws for the past two and a half months, will block roads and highways from 12pm to 3pm.

The protesters have assured that no disruptions will be caused in the national capital and that emergency and essential services such as ambulances and school buses will not be stopped during the blockade. However, the Delhi Police on Friday reiterated that they have not granted any permission to hold the ‘chakka jam’ in the city and have warned that legal action will be taken against those found disrupting the city’s traffic and law and order.

Security at the farmers’ protest sites at Singhu, Tikri and Ghazipur borders have been stepped up with multilayered barricading using barbed wiring on top, concrete walls, trenches, nails boards drilled onto roads and netting to stop pelted stones. Heavy deployment of security personnel armed with anti-riot gear has also been done to stop the agitators from entering the Capital.

Nearly 15,000 personnel of the paramilitary forces of Rapid Action Force (RAF), Central Reserve Police Force (CRPF) and Central Industrial Security Force (CISF) – all armed with anti-riot equipment – will be on duty along with thousands of Delhi Police personnel to maintain law and order during the ‘chakka jam’.

Officials said that the police are also keeping a tab on social media to keep a watch on those spreading rumours or instigating people against the government and the police. The move comes after farmers’ proposed tractor rally on Republic Day took a violent turn and clashes broke out between the protesters and security personnel. While one farmer died during the chaos, many participants on both sides suffered injuries. Following the clashes, internet services were also restricted in several districts of Haryana.

Police said they have intelligence inputs that protesters may deflate tyres of vehicles to cause jams on roads, all the police stations have been asked to keep air pumps with them for filling up deflated tyres. “Cranes have also been arranged to remove such vehicles and clear the traffic. Videographers and photographers will also be present for capturing the activities of protesters. We will also be using drones for aerial surveillance,” said an officer.

Workers of various political parties and student organisations have also planned a foot march from Shaheed Park near Delhi Gate to ITO during the ‘chakka jam’, according to intelligence inputs.