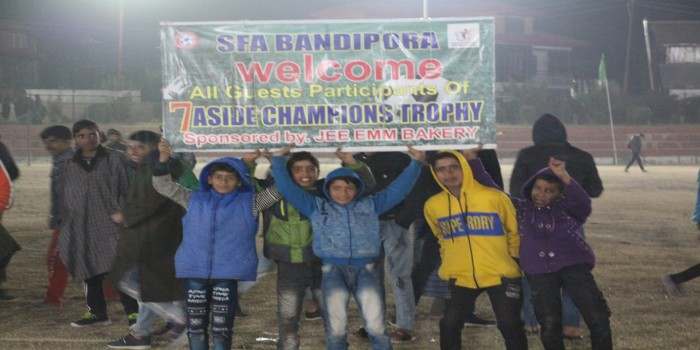 The Jammu and Kashmir police achieved yet another milestone in connecting with the people and encouraging the youth in the productive activities during the past one month when its football tournament in Bandipore in north Kashmir attracted several competing teams and also the enthusiastic spectators , who were the virtual participants in the tournament . This tournament seen as a sports event had more than one meaning for the police and the people of Kashmir – a shared sense of participation in the activities that bring out the latent talent , promote peace and harmony and put the youth on the path of the positivity .

It was clear when the month-long football tournament concluded in Bandipore on Sunday evening under the lights. These lights had the literal meaning that darkness is being shed in favour of the light. This idea of Director General of Police Dilbag Singh fructified because of the meticulous planning , and the police-police contact doubled by tapping the enthusiasm of the youth whose talent had remained unexplored so far.
DG Police’s idea , if translated in real terms , it means that the youth of Kashmir , and the people at large , need outlet of their hidden talent that could destress them from the restrictions that they had to undergo due to the pandemic of corona virus , and that depression was straying them . The police have brought them to the light and air that they deserved.

The conclusion of the tournament on Sunday attracted huge gathering of sports enthusiasts, who witnessed the finals . The public had all the appreciation for the District Police Bandipore that had helped them channelize their energies on the playground and injected positive thoughts that they could translate into the playfields and other productive activities keeping in tune with the vibrant social and career-building mood that is on rise in the Valley.

‘Alongside the Volleyball tournament that had started on 3rd of this month also concluded with the similar enthusiasm and sense of participation of players and spectators.

The best part was the event being held under the floodlights that enhanced the value and attraction of the game and enthusiasm for it.