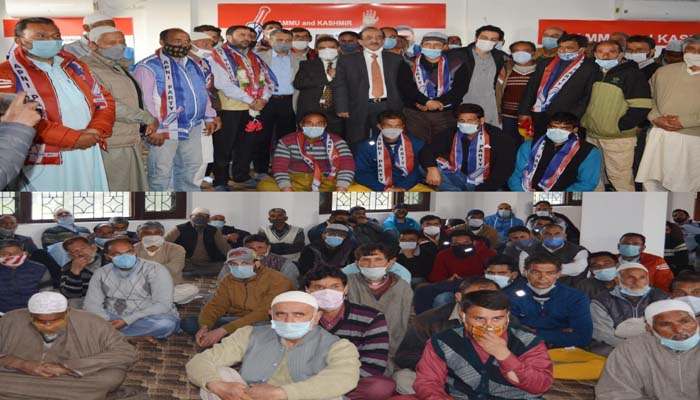 Welcoming the new entrants into the party-fold, Bukhari impressed upon them to work selflessly for the welfare of the common people in their respective areas.

‘The political legitimacy of any party always depends on the works it does for the welfare of the people. The region of Jammu and Kashmir has witnessed a developmental stagnation due to the apathetic attitude of various regional parties,” he remarked.

He said: “Apni Party has pledged to put in its efforts at grass root level for the betterment of the existing condition of the people, “he observed.

He said that the Party lays stress on the economic development and progress related issues that affect the lives of the people.

“Pertinently, all the demands taken up with the Central leadership or current UT administration, since the inception of the Party, have been profoundly embedded in the public interest,” he remarked.

We have never adapted to the two-hoot policy even though we may have to suffer for it. He said:”The virtuous principles of ‘Sincerity’ and ‘Politics of Truth’ shall continue to remain our party’s hallmark, come what may.”

Altaf Malik alongwith scores of other new entrants thanked the party leadership for providing them with such a dependable platform and pledged to strengthen the party at grassroots level.