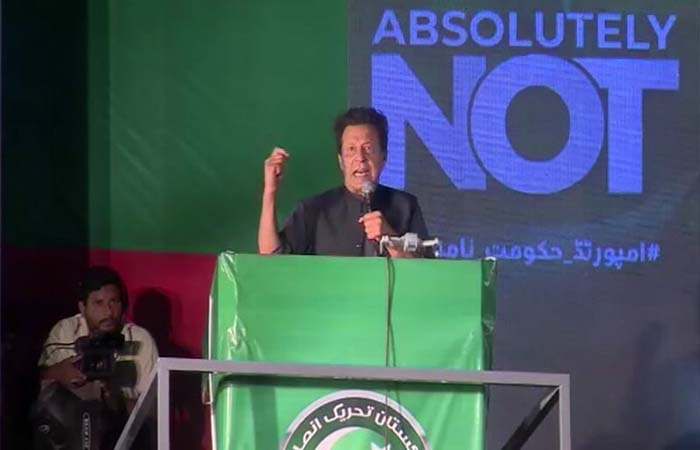 Pakistan refuses to fade from the headlines , new chapters of confrontation  between institutions are opening with frightening frequency , now  new battle lines  have drawn between  the army  and former prime minister Imran Khan , the situation, so created, is primarily due to the hysterical campaign launched by the latter in his obsession with his self  and political ambitions of Utopian scale  in which he views himself as pure gold and rest the rusted iron.

Imran Khan has started three-track campaign- anti-  America, anti- Army and anti- Shehbaz sharif , the common point  is his bruised ego because his government was  removed through the democratic means  of no-confidence motion sponsored by the then opposition parties . This is what was unacceptable to  the cricketer , who prefers to call himself as “ Kaptaan” or Captain ,ignoring the rule of the game that no individual is captain   leads the team forever. Captains of the teams keep changing with the times, in politics , this truer than  in any other field.On Saturday evening , Imran Khan addressed a huge rally of his supporters in Karachi  where he took his fight against the army to a scale where it is bound to rip apart the institutions and throw his nation  that he claims to love the most  to new chaos and disorder. His own call to the people to determine, whether it was the American interference in Pakistan’s  affairs , the basis of which is a cable from Pakistani ambassador to the US, or it as a conspiracy . He might have played a  politically clever card , making the people to deliver verdict on the matter, but as the slogans raised by his  lieutenants at the “ Jalsa”,, which is Urdu translation of a rally or public gathering , made it plain that a hysteria was being created  against America, and in which  the army and  leaders of the coalition , now ruling the country, were targeted . This is a recipe for the disaster that Imran Khan wants to bring to Pakistan, trekking on a dangerous path , my way or highway.

Imran Khan spoke  indirectly against the army at Karachi rally , without  caring for the consequences it  could bring for Pakistan as a nation , its stability . It is true that Pakistan army is  most powerful institution  that has either ruled directly or acted behind the scenes in 75 years of its existence .The army has control over the domestic and foreign policy . Imran knew it, but he developed an illusion that he is the greatest and  could walk away from the  shackles . That is where he made the biggest political mistake .The  army, throughout this theatre that unfolded in various acts  in Pakistan’s politics , refused to support Imran Khan , for  the top army brass knew that the premier had  courted the illusions that he is the only person who could , or should , rule the state.

Now  when Imran Khan has chosen to all the institutions – he undermined the parliamentary system  on April 2nd when he blocked the no-confidence motion , which subsequently was taken up  following the intervention of the Supreme Court  and that too not before  he found  himself cornered from all sides . He questioned judiciary and asked why the Supreme Court opened its doors at midnight , without reflecting  that  how he was seeking to block the motion against him till the last minute of April 9.

It doesn’t require  knowledge of rocket science to comprehend that what  this man is trying to do: wreck Pakistan and its  institutions . The campaign launched by him  , which is based on the appeal to the extremist ideology of Islam  , producing radicals , and blaming all other institutions being against him for he stands for purity of nationalism and religious identity , is sufficient to cause an irreparable damage to the nation that he claims he  is defending against all the internal  betrayals and external diplomatic pressure , is going to be major source of destabilization of Pakistan.

History of Pakistan is a testament that the clash of the institutions has always ended with disasters . That has caused problems for the world over, because Pakistan’s politics and machinations of its politicians and the army  Generals create problems for all the nations, those in its neighbourhood , and far away. Afghanistan is in the current state , where it staring at hunger, starvation and facing the worst ever crisis of governance , due to Pakistan. India is wary of Pakistan’s actions because the politicians and  Generals say one thing and   do quite  another . The reservations of India about the situation in the neighbouring country to its west are well placed, because Pakistan has always sought to create troubles for India as and when it is in political turmoil.