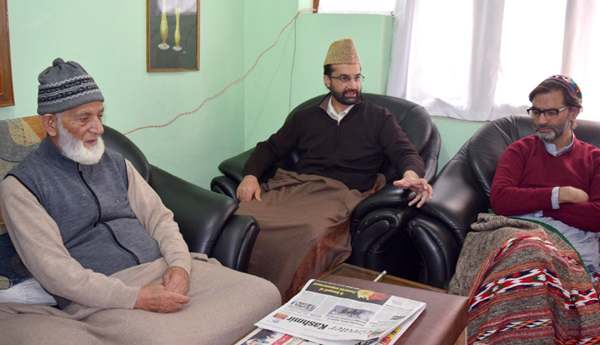 According to the sources the three separatists leaders in their three hours long meeting discussed various issues including conduct of examinations , shutdowns and weekly  calls for strike.

The three leaders met for the first time after the unrest  and clashes in Kashmir valley following killing of Hizbul Mujahedeen Commander, Burhan Wani.

The issue of re-opening of schools , which were closed for last nearly four months, was also discussed.

The three separatist leaders also decided to talk to different traders and transport union before chalking their further course of action on Nov. 08

The meeting was held under heavy security.

Separatists leaders have given call for general strike since killing of Burhan Wani resulting in complete shutdown in Kashmir valley including, schools, business  establishments, Transport etc. The massive tourist footprints in valley has been reversed since the unrest.

“The unrest, strikes and shutdowns took heavy toll of studies children who face big question mark on their career with their toil seems to be going down the drain,” bemoaned a common man not willing to be named.

Kashmir’s top separatist leadership will decide its future course of action by involving  all the stake holders in a meeting on November 8 in a  bid to broaden the decision making on the shutdowns and  marches in view of the dwindling support for the continued  paralysis of normal life  in Kashmir for the past four months.

The top separatists Syed Ali Shah Geelani , Mirwaiz Umar Farooq and  Mohammad Yasin Malik  who had profiled themselves as “ resistance leaders” fighting against the “ Indian rule in Jammu and Kashmir” took this crucial decision in their more than three-hour long meeting  at Hyderpora residence of  Geelani.

Chief Minister Mehboba Mufti had asked the authorities that let the separatist meet and interact face to face  to present a softened face of the PDP-BJP government .  She had told the  police chief K Rajendra  not to put any curbs on the meeting of the separatist leaders and allow them to decide their future course of action.

She was confident that in the light of the public anger and pressure over burning of schools in Kashmir – more than 30 of them have been burnt  so far in the disturbances that followed the killing of militant commander Burhan Wani in an encounter with the security forces  on July 8 this year. Her argument has always been to “ take all stakeholders on board.”

At the end of the Sunday’s meeting, a release by the separatist leadership said; “ To chalk out future course of action regarding the  present peoples’  resistance, a joint meeting of all stake holders will be called on Tuesday, 8th November 2016.”

It said that the “ the struggle of Kashmiris is not for any economic benefit or packages but for determining the future of millions of Kashmiris. So-called rulers are pushing Kashmiri youth to the wall by persistently and continuously choking them.”

“Various issues regarding the freedom struggle and current peoples resistance was discussed threadbare during the meeting. It was asserted that the struggle for freedom is not meant for any economic gains or packages but for the determination of future of millions of humans living in Jammu Kashmir. Leaders unanimously rejected the statement of the Indian Prime Minister, wherein he has said that “development is the corner stone of Kashmir solution”.