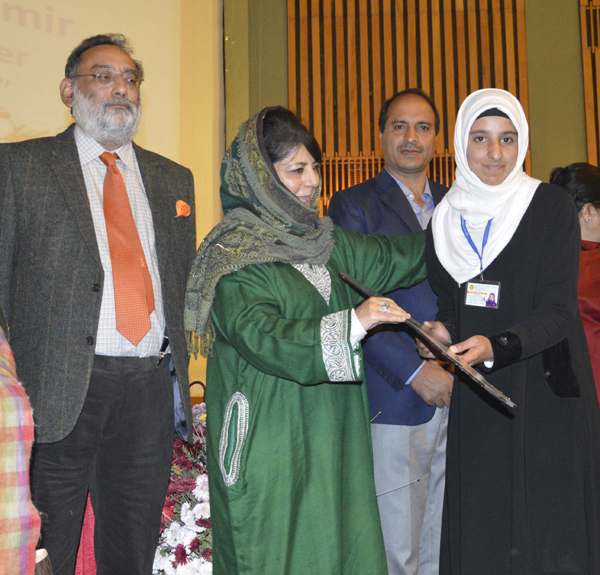 Listing women empowerment as one of the top agendas of the State Government, Chief Minister,  Mehbooba Mufti, today said the female folk are important stakeholders in making Jammu and Kashmir a peaceful and progressive State.

“Women have huge stakes in peace as they are the first casualty of any trauma or violence. Also, the brunt of the societal losses is borne more by the women than the men. In our world which is full of chaos, investments must be made to empower women. If you empower a girl or a woman, you are empowering the entire nation,”  Mufti said.

The Chief Minister was speaking during two separate functions at SKICC in Srinagar and Dak Bungalow Baramulla while launching ‘Empowering the Girl Child’ scheme. Ahead of her speech, Mehbooba handed over keys of scooters to 300 girl students of Government Colleges for Women MA Road and Nawa Kadal College in Srinagar and 150 students of Government Women’s College Baramulla. Under the scheme, the Government provides subsidy on scooters for meritorious girl students.

Noting that women in our society struggle throughout their life starting right from their birth and have to face various difficulties, the Chief Minister said that this scheme is part of an endeavor of the State Government to empower the girl child and to facilitate her independent mobility. She said under the scheme the State Government will facilitate 50% sponsorship of the cost of Scooty for college going girls in the State. These vehicles, will enable girl’s independence of mobility and at the same time promote confidence in them, she added.

Hoping that the prevailing situation will improve and better time shall prevail, Mehbooba said that “as Mahatma Gandhi saw a ray of hope in Jammu & Kashmir in 1947, I also see a similar ray of hope that things will be back to normal soon”.

The Chief Minister also announced All Terrain Mountain Bike (ATMB) scheme for meritorious boys on the pattern of Scooty Scheme for girl students. She said under the scheme any boy in the 10th standard belonging to lower economic background who has to cover a distance of more than 2 kms from his home to school and shall secure above 58% in  his 10th exams will be eligible for a mountain bicycle if he gives in writing that he shall continue to pursue his education.