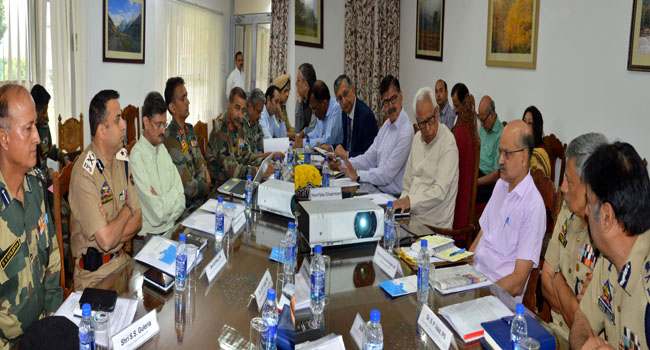 Shri Umang Narula, CEO, Shri Amarnathji Shrine Board, informed that as of 26th July,2018 evening 2,49,220  pilgrims had paid obeisance at the Shrine and the daily average arrival of the pilgrims was showing a progressive decline.

In the context of the further thinning of the Yatra in the coming days, the meeting reviewed the security aspects relating to the inward and outward movement of the declining number of Yatris as well as of the Langar Organisations which would be moving out of the Valley after finishing their assigned tenures. The meeting discussed the obtaining security environment and the status of preparedness for meeting any unforeseen arising situation along the entry into the Valley and on the routes to Baltal and Chandanwari.

Divisional Commissioner, Kashmir informed the meeting that he has been regularly monitoring the basic facilities, including provision of medical services, water and power supplies etc. and all emerging issues are being handled on an immediate basis. He further informed that wire-mesh fencing and protection works have been completed on the most vulnerable stretches of Railpathri-Brarimarg track to ensure safety of pilgrims and Service Providers.

CEO informed that with a view to ensuring timely medical services to Yatris, a total of 71 Medical Camps have been setup on the two Yatra routes; the State Health Department has established 5 Base Hospitals, 12 Medical Aid Centres, 14 Emergency Aid Centres and 7 Medical Camps of Indian System of Medicines in the Yatra area; Army has established 6 Medical Camps, BSF 9, CRPF 10, SSB 2, J&K Police 2 and NGOs 4; the State Health Department has set up 15 Oxygen Booths (with oxygen concentrator) at critical locations on both the routes; these oxygen Booths are in addition to Oxygen concentrators which are available at each Base Hospital. To provide specialized medical treatment, doctors and paramedics have also been deployed by the Union Health Ministry from various prestigious institutes which include AIIMS, CGHS, JIPMER, LHMC, PGIMER and Dr. RML Hospital, besides those deputed by the States of Bihar, Delhi, Gujarat, M.P., Maharashtra, Rajasthan, Punjab, and U.P.  to assist the medical arrangements for the Yatra at the various camps. It was further informed that apart from OPD facility being provided to 1,80,289 Yatris/ Service Providers and inpatient treatment to 25,012 Yatries/ Service Providers at various medical camps in the Yatra area; 3014 X-Rays, 3707 ECG, and 11,555 lab tests have been performed so far in the Yatra area. Further, 115 patients have been treated in HAPO (High Altitude Pulmonary Oedema) Bags and 122 patients have received medical care forcardiac related problems in the Yatra area. 598 cases have been referred to tertiary health facilities for specialized treatment at Srinagar.

Governor observed that he shall further review on 31st July the number of the incoming pilgrims and consider the requirement of change/ rationalisation of the existing arrangements. In this context CEO SASB, was directed to hold urgent consultations with DC Jammu and other officers concerned with organising the daily convoy of pilgrims from Jammu to Kashmir.