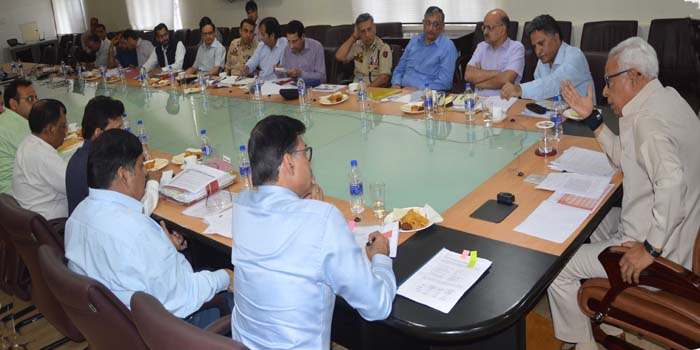 Governor N. N. Vohra chaired a high level meeting at the State Secretariat today to gain a first hand assessment of the scale and nature of land encroachments in the State. Consequent to the detailed presentation made by Shri K.B. Agarwal, Financial Commissioner, Housing and Urban Development Department, Governor expressed serious concern over the encroachment of more than 18 lakh kanals of Government, Panchayat and Forest lands in the State, in gross violation of the Revenue, Forest and Municipal laws.

Governor Vohra directed all District Collectors in the State to immediately carry out a comprehensive mapping of all encroachments relating to State, Forest and Panchayat lands, Dal, Wular, Nageen lakes and other water bodies, Highways and public roads in their respective jurisdictions and forward the same through the  Divisional Commissioners of Kashmir and Jammu by 31st July, 2018. He directed the District Collectors to make full use of available technologies, such as Geo Tagging and Satellite Mapping, to prepare a fully verified database by the given date.

Governor directed Chief Secretary to ensure that the instructions earlier issued by the Revenue Department, pursuant to the Supreme Court Orders in  “Jagpal Singh Vs. State of Punjab and Others” should  be suitably revised to clearly lay down the roles and responsibilities of District and Divisional Administration regarding encroachments on government/public lands and issued to all  concerned for effectively enforcing the law to secure the existing encroachments on time bound basis and ensure against fresh encroachments.

Shri K. Ganai, Advisor to Governor, suggested that a Special Court / Tribunal be constituted to hear all cases pertaining to encroachments so that evictions in such cases are not delayed by the parties seeking stay of proceedings from various Courts.

Governor directed that both Divisional Commissioners, after they receive base data reports from their District Collectors, should prepare by 15thAugust 2018 lists of major encroachments, especially on National Highways, major roads, public  places, commercial hubs etc. especially  those which are causing obstruction/ nuisance and initiate time-bound action for the eviction of encroachments.

Governor directed Divisional Commissioners to ensure that the Deputy Commissioners enforced: (i) the Ribbon Development Act and other legal provisions to strictly ensure against encroachments, particularly along both sides of the National Highway from Lakhanpur onwards; (ii) urgently reviewed issues relating to enlargement of Abadi Deh for meeting the genuine housing requirements of the people living in the villages. He also directed that the Police department should provide all required assistance by deploying adequate forces to remove illegal encroachments.

Governor directed Chief Secretary to review the status of digitization of land records in the State, which stands inordinately delayed. Governor observed that he shall take a further meeting to review results achieved, around 20th August 2018.

J&K govt websites to have more privacy and security