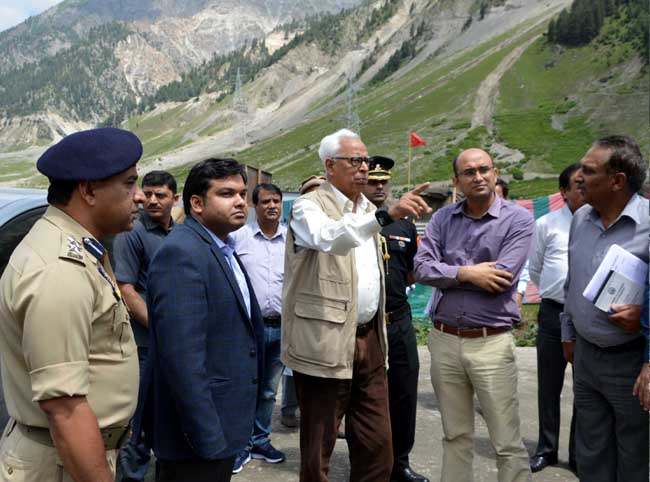 Governor N.N. Vohra, Chairman of the Shri Amarnathji Shrine Board, visited Baltal Base Camp, Domel Access Control Gate and Neelgrath Helipad to gain a first hand assessment of the ongoing pilgrimage and the difficulties, if any, being faced by the Yatris. Governor was accompanied by Sh. Bhupinder Singh, Additional CEO of the Shrine Board, Dr. Piyush Singla, Deputy Commissioner Ganderbal and Sh. Fayaz Ahmad Lone, SSP Ganderbal.

On arrival at the Baltal Base Camp Governor went round the Camp; visited the Base Hospital where he met Doctors from Delhi and Rajasthan who are serving this 40 bed medical unit since 28 June; visited a few Langars and Shrine Board huts; reviewed the functioning of the STP at the Base Camp. He devoted considerable time to review the sanitation and cleanliness arrangements within and outside the Camp and gave directions to Additional CEO, General Manager (Works), General Manager (Sanitation) and Camp Director regarding the further actions to be taken by them to enhance cleanliness.

Later, Governor took a meeting with Camp Directors and all the officers involved in the conduct of Yatra. He particularly reviewed the sanitation arrangements; functioning of Sewage Treatment Plant (STP); water and power supplies; functioning of Medical Units and Langars, availability of essential commodities etc.Governor reiterated his earlier directions to Camp Directors about the need to ensure effective maintenance of sanitation in all the Camps in the Yatra area and, besides, complete cleanliness along both the Yatra routes. He directed the Camp Directors and all concerned officers of the District Administration to ensure that there is no impediment in the pilgrimage till its conclusion on August 26.

Later Governor inspected the heli-operations at the Neelgrath Helipad and enquired about the services from the Yatris.

Considering the progressive decline in the strength of the pilgrimage, Governor shall be taking a meeting next week, also involving all Security Forces, regarding the management of the pilgrimage in the remainder period of the Yatra.