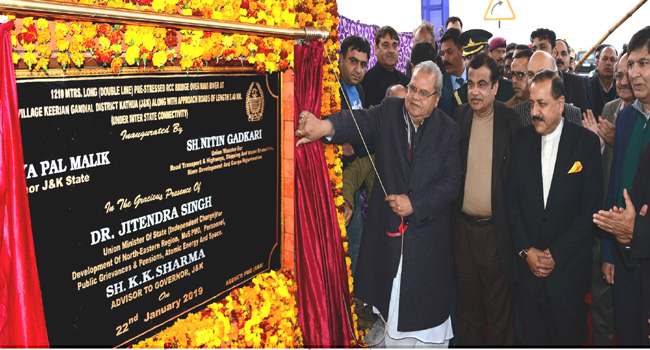 Besides linking the secluded areas of the state to major cities, the bridge will strengthen the inter-state connectivity and reduce the travel distance between the two inter-state destinations of Jammu and Kashmir and Punjab. The bridge will also reduce traffic on the Jammu-Kathua-Pathankot National Highway.

Governor Satya Pal Malik welcomed Sh. Gadkari and Dr. Jitendra Singh and observed that the inter-state Keeriyan- Gandiyal bridge on Ravi river in the Kathua district will provide better connectivity to disconnected villages of J&K with Punjab and boost economic development of the region.

Governor thanked Sh. Gadkari for his intervention in the revival of Shahpur- Kandi project  which will significantly enhance the irrigation potential of the State.

Governor observed that to give boost to developmental activities and to complete the languishing projects across the State,  Jammu and Kashmir Infrastructure Development Finance Corporation (JKIDFC), has been established with an authorization to raise loans up to Rs. 8000 Crore.

Sh. Gadkari lauded the efforts of J&K State especially the Engineering wing for executing the project before the set timeline and saving Rs. 26 Crore. He said that the Central Govt. has left no stone unturned to layweb of connectivity projects in this state by sanctioning new highways, bridges and tunnels, upgrading the existing highways, ring roads in Jammu and Srinagar besides Jammu-Srinagar and Srinagar-Leh corridor for all weather connectivity.

Dr. Jitendra Singh called this event a historic achievement as 70 years long pending demand of the people of Keerian-Gandial village get fulfilled today. He said that Rs. 158.84 Crore is spent not to connect just two panchayats of Keerian and Gandial of Kathua district but this bridge will prove as an alternate inter-state connectivity between J&K and Punjab thus decongesting the traffic on Jammu-Pathankot NH to a great extent besides giving a boost to the social as well as economical development of the people living in the adjoining areas. The 30 KM distance between Kathua and Gandial was covered in an hour earlier but after the construction of this  bridge the distance was reduced to 8 KM and it now take only 10 minutes to reach Gandialfrom Kathua, Sh. Singh added.

Sh. Sanjeev Verma, Divisional Commissioner Jammu; Sh. Rohit Khajuria, Deputy Commissioner Kathua and many senior civil and police officers were among those present on the occasion.