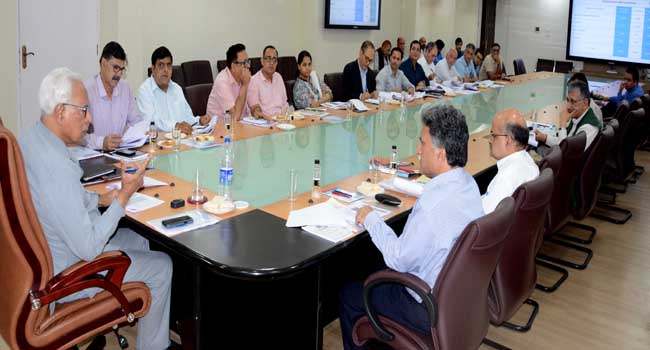 At a meeting held at the State Secretariat Governor N N Vohra called for continuing capacity building of teachers through trainings and workshops to sharpen their skills and teaching abilities keeping in view the fast-transforming academic scenario.

Governor reviewed the functioning of the School Education Department, particularly with regard to the vacancies existing in the Department and to assess the status of the recruitment process underway to fill these vacancies.

The meeting was informed that the Government has constituted a high-level inter-departmental Committee, headed by Principal Secretary Finance, to examine the entire gamut of issues in the School Education Department, including rationalization of Schools, teachers and the staff as per the national norms, identification of surplus Schools and posts; and the reforms needed to be introduced to improve the educational standards in the State.

The Committee will also look into issues relating to SSA teachers, including their salaries, and shall submit its report to the Government by 10 November 2018.

Governor directed the Principal Secretary Finance to give an Interim Report to Chief Secretary on urgent basis so that appropriate decision could be taken regarding the payment of the salaries of SSA teachers.

Regarding the issue of human resource shortage in the Education Department, Governor asked the recruiting agencies to expedite recruitments against teaching and non-teaching posts and stressed the need for taking urgent measures regarding confirmation of all the promotions made from time to time as per the norms in OPG. He directed convening of time-bound Departmental Promotion Committee (DPC) meetings to fill up the vacancies at various hierarchical levels and create career progression opportunities for the employees of the Department.

Regarding establishment of separate Human Resource Management Branch and constitution of a dedicated Recruitment Board for the Education Department to fast-track recruitments, Governor asked the Chief Secretary to consider all related issues in this regard and advise him early.

Regarding detachments in the Department, Governor was informed that 1002 detachments had been ordered and all the Chief Education Officers have been asked to submit final reports in this regard by 20 August 2018.

The meeting was informed that the “attachments” made on the basis of rationalization of schools, security reasons, marriage and compassionate grounds and in the interest of smoothacademic environment, under proper Government Orders, had not been cancelled. Governor directed that all such attachments must be reviewed with in 10 days, under report to Chief Secretary/ Advisor (G).

Earlier, in a detailed presentation, Secretary Education Rigzian Sampheal, informed the meeting about the developments, deficiencies and the scope  for improvement in the Department.

The meeting was informed that enrolment of students in J&K stands at 13.1 lakh in government schools and 9.9 lakh in private schools from Primary to Higher Secondary levels. The Gross Enrolment Ratio in Primary, Upper Primary and Secondary levels stands at a healthy 98.70, 97.86 and 61.65, percent respectively.

The meeting was informed that the Department has Pupil-Teacher Ratio of 11:1, 14:1 and 32:1 against the norm of 30:1, 35:1 and 40:1 in elementary, secondary and higher secondary levels respectively and efforts are on to further improve it.

The officials revealed that there is a deficiency of 2578 gazetted staff and 13863 non-gazetted staff positions. The deficient staff positions also include 1868 lecturers and, 2924 Masters (including RMSA/SSA) and 5602 teachers. It was further informed that filling of these vacant posts is at various stages of recruitment.

The meeting was informed that 970 lecturers were directly recruited and two posts of Joint Directors, 9 positions of CEOs, 26 ZEOs, 54 principals, 309 lecturers and 315 headmasters were filled through promotion.

The meeting was informed that during NAS 2017 results, the performance of students in J&K was almost similar in comparison to the national average and work is being done to further improve it.

The department has also started specialized training of teachers and is recruiting subject-specific teachers. Furthermore, all untrained in-service teachers have been registered under BEd and DEl.Ed (ODL) mode through IGNOU and NIOS.

Directors of School Education Kashmir and Jammu, Director SSA, Director RMSA and other senior officers of the Education Department were also present at the meeting.