Governor Chairs 35th meeting of the Shri Amarnathji Shrine Board 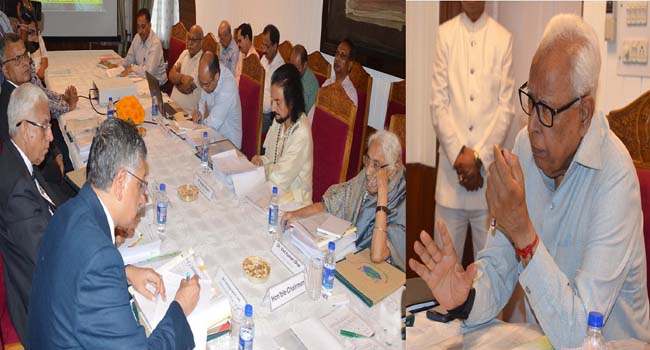 Calls for sustained efforts towards continuing improvement of facilities for pilgrims

The Shri Amarnathji Shrine Board met here today under the chairmanship of Governor N.N. Vohra, Chairman of the Board, at the Raj Bhavan. Governor called for continuing attention for progressive improvement of the facilities provided to the pilgrims who undertake this annual pilgrimage.

The Board meeting was attended by Dr. (Prof.) Ved Kumari Ghai, Pt. Bhajan Sopori, Sh. D.C. Raina and Dr. Chander Mouli Raina, all Members of the Board, and by Sh. Umang Narula, CEO, Sh. Bhupinder Kumar, Additional CEO and other officers of the Board.

Shri AmarnathjiBarfani Langer Orginisation (SABLO) had earlier requested to be heard by the Board regarding the duration of Shri Amarnathji Yatra. In a presentation made before the Board, SABLO stressed that the pilgrimage data for the past 5 years shows that more than 90 % of the Yatris perform “Darshan” in the first 30 days. On this basis SABLO argued that the period of Yatra should be limited to 30 days, citing various reasons.  Taking note of SABLO’s demand the Board observed that this important issue needs to be placed in the public domain and discussed further.

The Board was apprised about the various steps taken for improving and enhancing the facilities for promoting the convenience of the pilgrims which included upgradation of the tracks from Baltal to Domel; upgrading of Neelgrath to Baltal Road (7 Kms); erecting railings  (6.6. kms) on the Baltal route and on the Chandanwari route (4.75 kms); development of resting places along the tracks etc.

CEO informed that State PWD and Pahalgam Development Authority have been maintaining the Baltal and Pahalgam tracks, respectively, and devoting attention to widening the tracks and erecting railings at all vulnerable places. Chairman directed CEO to ensure that the remaining work is taken up in the post Yatra period, immediately after conclusion of the Yatra on 26thAugust, 2018.

CEO informed the Board that as part of new initiatives to introduce the latest technologies in the field of Environmental Solutions, the existing Sewage Treatment Plant at Nunwan Base Camp has been upgraded (using Moving Bio Bed Reactor Technology) to 300 KLD capacity and made operational during the current Yatra; 18 Bio-bins (12 on Baltal axis and 6 on Pahalgam axis)  installed at various locations for composting of Bio-degradable waste where adequate consortium treatment takes place; 5 plastic septic tanks on pilot basis, each with capacity of 1000 litres, have been installed at Lower Holy Cave in addition to cess pits to prevent leaching of effluent into the river; 2 Reverse Vending Machines which efficiently shred plastic bottles into fine pieces  have been installed at Sonamarg and Baltal through District Administration Ganderbal. CEO further informed that this year the Board has installed 2749 Toilet units, 515 Bath units, and 98 Bottle Catchers in the Yatra area. Further, the Camp Directors have been instructed to effectively ensure sanitation and hygiene in the Camps through daily monitoring and inspections of the Camps, toilets and baths.

The Board noted with satisfaction that this year the State Governments of Bihar, Delhi, Gujarat, Madhya Pradesh, Maharashtra, Punjab, Rajasthan, Uttar Pradesh, and Union Ministry of Health & Family Welfare have deputed a good number of doctors from prestigious institutions like AIIMS, CGHS, Dr. RML Hospital, JIPMER, LHMC and, PGIMER to assist the medical arrangements for the Yatra, at the various Camps. CEO reported that the available doctors on duty have been instructed to assist Yatris on the tracks and particularly check the vital parameters of those showing symptoms of illness.

CEO informed the Board that on the Governor’s directions MI-17 helicopters of Indian Air Force had evacuated the 567 Yatris who had got stranded at Panjtarni because of rains and mountain slippages at Rail Pathri. CEO informed that to meet the cash requirements of Yatris, J&K Bank had air lifted and made operational a Micro ATM at Panjtarni. It may be mentioned that ATMs are already functioning at the Baltal and Nunwan Yatra Base Camps.

CEO informed that important Yatra related information, particularly about Dos and Don’ts to be followed by the Yatris, has been publicized through Doordarshan, FM Channels, All India Radio and Press Information Bureau through broadcasting Documentary Film, Video Spots, and Audio Spots prepared by the Shrine Board. The Board has also introduced a Short Code Telephone number 1364, obtained from BSNL, enabling the intending pilgrims to easily remember a four-digit number for seeking information or assistance in regard to their Yatra. Further, all registered Yatris are being informed about the Do’s and Dont’s, Health Advisory, weather forecasts and other advisories relating to the Yatra through the SMS service. Till now, about 7.50 lakh SMS messages, including in Hindi, have been sent to the registered Yatris through NIC’s Bulk SMS facility.

The Board Members were apprised that the laying of Optical Fibre Cable along both the Yatra Routes, under Army’s Project Kranti, has strengthened the telecommunication facilities being provided by the BSNL. The availability of bandwidth of the mobile towers as well as the number of channels in the BTSs has been increased at Baltal, Holy Cave, and Panjtarni and this has resulted in improved voice calls and higher data speed.