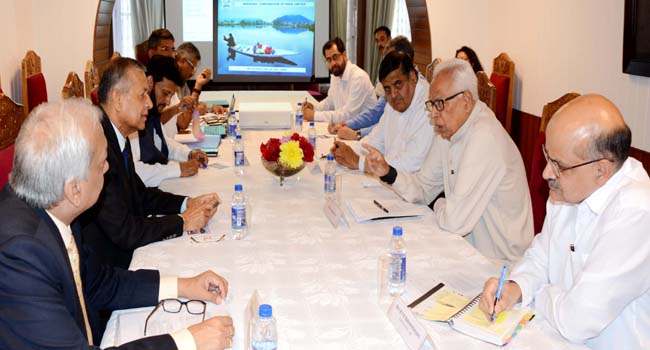 The spokesman of the Raj Bhavan has recalled that since the commencement of the Governor’s Rule, Governor N.N. Vohra has held two meetings to discuss the rapidly increasing congestion of the Dal Lake and, among the decisions taken, it was decided that manual de-weeding shall commence without any further delay. Spokesman further recalled that a proposal which had been pending before the erstwhile Coalition Government for purchasing and hiring de-weeding, dredging and other equipments for the Dal Lake had been approved by the Governor, in the State Administrative Council,  on 4th July 2018. He further stated that consequent to the Governor’s direction, 700-800 persons have been engaged by LAWDA for cleaning the Dal Lake since 21st July 2018.

Spokesman stated that in the course of discussions held by Governor with officers of all the departments concerned with the preservation of the Dal Lake it was recognised that, despite recurring efforts having been made during the past over two decades to maintain the Dal as an attractive and clean water body, the necessity of securing the advice of external experts had not been vigorously pursued.

In the aforestated context, Governor Vohra had spoken to Admiral Sunil Lanba, Chief of Indian Navy, to help in identifying experts who could undertake a benchmark survey of the Dal Lake and, later, also of the Wular Lake. Side by side, he had asked Shri B.B. Vyas, Advisor to Governor, to get in touch with Shri Rajesh Tripathi, Chairman cum Managing Director (CMD) of the Dredging Corporation of India (DCI). Navy Chief informed Governor that Vice Admiral (Retd) S.K. Jha, former Chief Hydrographer, could assist the Jammu and Kashmir Government in formulating an approach for dealing with the problems facing the Dal Lake. At the request of the State Government Vice Admiral S.K. Jha and Sh Rajesh Tripathi, CMD of DCI, visited Srinagar on 30th – 31st July and undertook separate surveys and assessments to identify the problems facing the Dal Lake.

Governor chaired a meeting at the Raj Bhavan where Vice Admiral Jha and Shri Tripathi presented their assessments. This meeting was attended by Shri B.B. Vyas, Advisor to Governor; Sh. B.V.R. Subrahmanyam, Chief Secretary; Sh K.B. Agarwal, Financial Commissioner, Housing and Urban Development Department; Sh Umang Narula, Principal Secretary to Governor; and Dr A.H. Shah, VC, LAWDA. From the assessment made by Shri Tripathi, CMD of DCI, it was learnt that the size of Dal has shrunk from its original area of 22 sq kms to about 10 sq kms; that the water quality of Dal has deteriorated due to intense pollution caused by untreated sewage and solid wastes that flow into the Lake; encroachments of water channels and clogging has diminished the circulation and inflows into the Lake, leading to extensive weed growth of Jal Khumbh (water hyacinth) which has emerged as a health hazard; due to siltation, encroachment etc the depth of the Lake has reduced at many places and its total capacity has gone down to 40%; the continuing night soil discharge from the 8/900 House Boats is causing extreme pollution.

Consequent to detailed discussions on  the various challenges facing the Dal Lake it was decided: (i) to request Chief of the Indian Navy for help in a comprehensive Bathymetric Survey of Dal-Nageen Lake being carried out to establish a benchmark data base for deciding the extent of dredging etc to be carried out in the various parts of the Dal Lake; (ii) to hold immediate discussions for appointment of Dredging Corporation of India as the nodal Consulting Agency to formulate a to-date DPR which focuses, interalia, on dredging identified areas of the land masses in the interiors of the Dal Lake; (iii) to initiate immediate action for examining the possibility of installing holding tanks and bio-digestors to ensure against the discharge of sewage by the 800-900 house boats into the Lake; in this context, Shri Agarwal, FC, HUDD, was directed to take immediate action; (iv) VC, LAWDA, shall commence immediate finalization of a project proposal for installing additional Aerators in the Dal Lake for increasing aeration activity and raising the dissolved oxygen levels in the stagnant pockets; (v) VC, LAWDA, shall share with CMD, DCI, all information regarding StateGovernment’s recent decision to procure/hire Lake cleaning machines, for such correction as may be necessary.

Vice Admiral Jha, who has several decades of experience in Hydrography, offered several valuable suggestions and the steps to be taken for the preservation of lakes and water bodies in J&K.

Governor Vohra has directed Shri Agarwal, FC, HUDD, to take immediate steps to implement the decisions taken in the aforesaid meeting and asked Chief Secretary Subrahmanyam to closely monitor further progress. Governor has thanked Shri Tripathi, Chairman, DCI, Vice Admiral Jha and the Chief of Indian Navy for their help and has hoped that the infusion of valuable expertise will enable the required preservation measures being taken, under a well considered roadmap, for achieving a positive outcome within a tight time frame. Governor would be personally reviewing progress on the basis of the Chief Secretary’s reports in regard to this very important project.