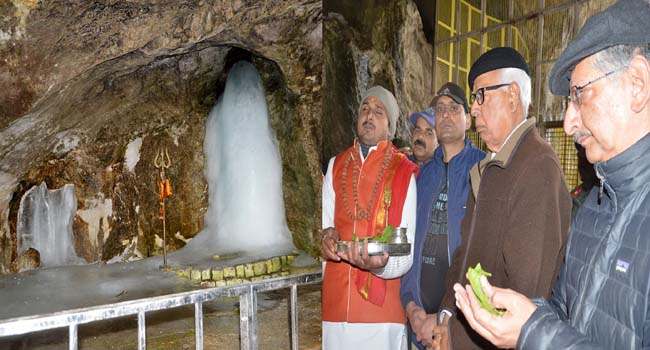 On account of continuing rain since last night the annual Yatra to the Holy Cave Shrine of Shri Amarnathji in the Kashmir Himalayas commenced rather late today, around noon, from both the Pahalgam and the Baltal routes. Governor N. N. Vohra, Chairman of the Shri Amarnathji Shrine Board, alongwith CEO of the Board, senior Army, Police, Central Police and Civil Administration Officers, paid obeisance at the Sanctum Sanctorum and participated in the Pratham Pooja ceremony. He prayed for sustained peace, harmony, progress and prosperity in the State.

On his visit to the Shrine, the Governor rapidly reviewed the arrangements made for the pilgrims at the Yatra Shrine Camp and conveyed the Shrine Board’s appreciation to the Army, Central Armed Police Forces, Police and Civil Officers and those from all the other concerned agencies for their strong involvement in the conduct of the Yatra. He stressed on the Camp Directors and all the functionaries involved in the management of the Yatra the need for effective supervision and round the clock monitoring for ensuring the smooth conduct of the pilgrimage.

Meanwhile, Sh. Umang Narula, CEO of the Shrine Board, has once again appealed to the intending Shri AmarnathjiYatris to embark on the pilgrimage only after getting medically checked and obtaining a valid Yatra Permit. This would ensure against any avoidable inconvenience to them.

CEO stated that the Board had issued a detailed Advisory of Do’s and Don’ts for the Yatris visiting the Shri Amarnathji Shrine and the Yatris need to strictly adhere to these guidelines as they would require to undertake an arduous trek through high mountain ranges under uncertain weather conditions.