Governor presides over the 30th Anniversary celebrations of SECMOL in Leh 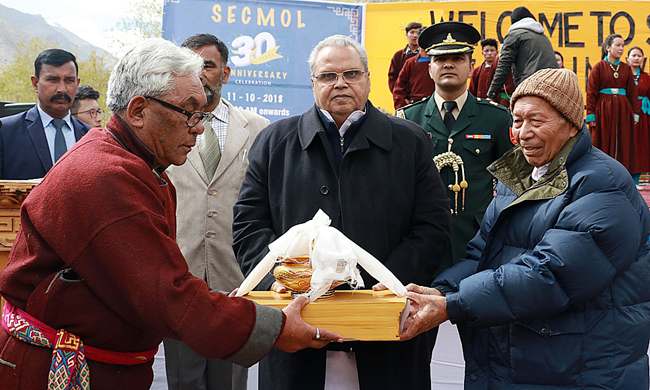 While appreciating the efforts of SECMOL in providing education and life skills to the students, Governor said that “empowerment comes with the education and people which give priority to education ensure a bright future for the nation, taking it on the path of development in the true sense.”

Governor appreciated Sonam Wangchuk for his commitment and conviction in taking up challenges and lauded his endeavour in keeping youth connected to their roots with a sense of honour in their rich culture, traditional knowledge and moral values.

Governor said that terrorism severely and adversely hampers the growth and development of youth and fills them with resentment against political parties, government and the country. He said that “We want to kill terrorism and not terrorists.” He added that his team is making efforts to build trust among youth and generating a positive platform for dialogue with the younger generation through various levels of interactions. He asserted that youth of Kashmir have great potential to excel in sports like cricket and football and his government is coming up with international stadiums in the valley to promote their talent.

He stressed on ensuring opportunities for the creative engagement of youth and enabling them to explore their potential and excel in different fields. He said that the priority of Governor’s Administration is on outreach and interaction with people at ground level and hearing their grievances. He added that their efforts are on to create an atmosphere for dialogue to address the issue of Kashmir.