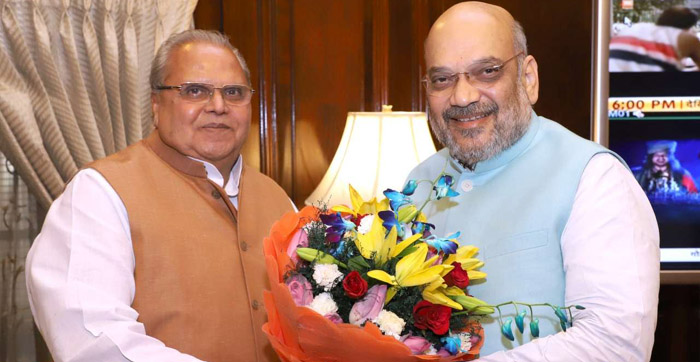 Jammu and Kashmir Governor  Satya Pal Malik has praised  strong leadership of Union Home Minister Amit Shah and declared that he delivers on what he promises .

Governor was talking to reporters after inaugurating Jahangir Chowk flyover in Srinagar on Sunday evening. He was responding to questions on the recent visit of Home Minister to Kashmir during which he had said that zero tolerance should be shown to  terrorism but at the same time the government should reach poorest of the poor, a catchphrase that has gained a new meaning in Jammu and Kashmir as the state administration has renewed its efforts in reaching out to the people in the remotest corner .

Earlier, J&K government had launched “ Back to village” programme that became a hit with the people in villages whom the officers visited and noted their problems.

Governor Malik said that there was no change in the policy of Centre toward Jammu and Kashmir, it was same what it was earlier. There has been an interpretation in certain circles that Home Minister’s renewed call to inspire fear among terrorists and their sympathisers was  a change in the Centre’s policy in Jammu and Kashmir. In fact, it was the reiteration of the earlier policy of the government in which no leniency was to be shown to the terrorists and their over ground patrons.

Malik, who  as Governor of the state is also ex-officio chairman of Shri Amarnth Shrine Board , said that he was confident that the Amarnath Yatra will passoff peacefully and successfully. The yatra is to commence from Monday  officially, though the first batch of more than 2,000 pilgrims left Jammu on Sunday morning.

He said that like all other years Muslims in Kashmir would make the yatra successful.