Handwara and Kupwara mandis to be functional round the year: Mahajan 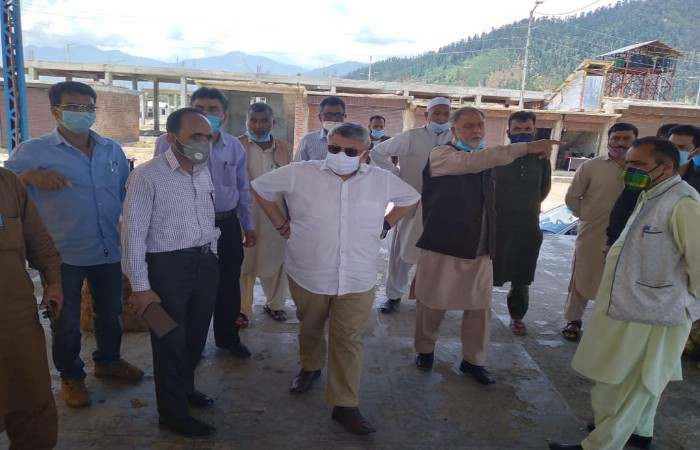 Director Horticulture Planning and Marketing Department Vishesh Mahajan on a tour of Kupwara visited Fruit and Vegetable Market Handwara and Kupwara to review the departmental activities and other developmental works going on in the Mandis of the district. Among others Director was accompanied by the officials from Engineer wing Horticulture, Deputy Director, and other officials.

During the review meetings, the Director Horticulture (P&M) instructed officials to take action against all those allottees who are not complying with the provisions of lease deed in Kupwara and Handwara mandis.

He further instructed the officials to ensure that both the Mandis, which are working partially till now, are made fully operational before 31st of July.

He directed that all the shop allottees in this direction should be contacted for the purpose and asked to comply within time period. He asked the officials to make allotees who have not constructed their shops yet to do so immediately.

He further instructed that all the allotees /shopkeepers should be pursued to conduct their business activity from the mandi and if any allotee fails to do so, then all such failing in compliance should be served notices immediately.

Director Horticulture (P&M) during his interaction with the stakeholder asked them to make both Kupwara and Handwara Mandis functional round the year.

At Handwara Mandi, Director Horticulture (P&M) reviewed and inspected the ongoing macdamisation work being carried out by the engineering wing. He asked the engineering wing to ensure timelines in execution and maintenance of quality in development works.

At both the Mandis, the Director Horticulture (P&M) had detailed discussion with all stakeholders wherein a number of issues were raised by the fruit Association members during their interaction.

At Handwara, the Director assured the Fruit Association who asked for a provision of canteen in the Mandi that the same would be constructed in the Mandi this very season.

The Fruit Association members at both the Mandis thanked the Director Horticulture (P&M) for the visit and also for the resolution of some of the issues raised during the interaction.