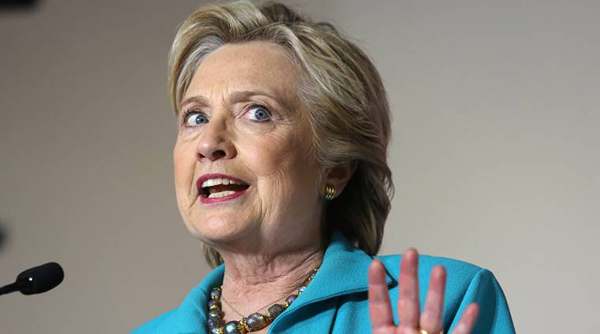 Hillary Clinton has vowed that she would not be “knocked off course” in the election’s final days, as she sought to push past a new FBI email inquiry in a sexting probe that delivered a late jolt to her race against Republican Donald Trump. “I’m not stopping now, we’re just getting warmed up,” Clinton declared during a packed rally with gay and lesbian supporters in battleground Florida on Sunday.

“We’re not going to be distracted, no matter what our opponents throw at us.” Trump campaigned in Las Vegas at a casino owned by billionaire GOP megadonor Sheldon Adelson and accused the Justice Department, without offering evidence, of trying to protect Clinton following the FBI’s discovery of new emails that could be related to its investigation into Clinton’s use of a private email server.

“Hillary has nobody but herself to blame for her mounting legal problems,” Trump said during a rally. Clinton’s advisers and fellow Democrats pressured FBI Director James Comey anew to release more details about the emails, including whether Comey had even reviewed them himself. The message was aimed at gathering more information about what the bureau is seeking from a computer that appears to belong to disgraced former New York Rep Anthony Weiner, the estranged husband of Huma Abedin, one of Clinton’s closest advisers.

Tim Kaine, Clinton’s running mate, said Comey owed it to the public to be more forthcoming about the emails under review by the FBI with only nine days remaining before the November 8 election. Calling Comey’s announcement “extremely puzzling,” Kaine said that if Comey “hasn’t seen the emails, I mean they need to make that completely plain.” Clinton’s campaign chairman, John Podesta, said Comey’s handling of the matter was “inappropriate.”

Clinton made unannounced stops yesterday in Florida at an early voting location, a Miami brunch spot and a soul food restaurant. She also addressed a predominantly black church, where she spoke of overcoming disappointments. “Scripture tells us to rejoice in our sufferings, knowing that suffering produces endurance and endurance produces character,” she said. “And character produces hope.” Clinton made no direct mention of the new FBI investigation, which has created anxiety among Democrats.

But while she criticised the FBI for a lack of transparency during a campaign appearance on Saturday, she tried to shift her
attention back to Trump yesterday, casting him as a selfish billionaire with a striking lack of empathy.