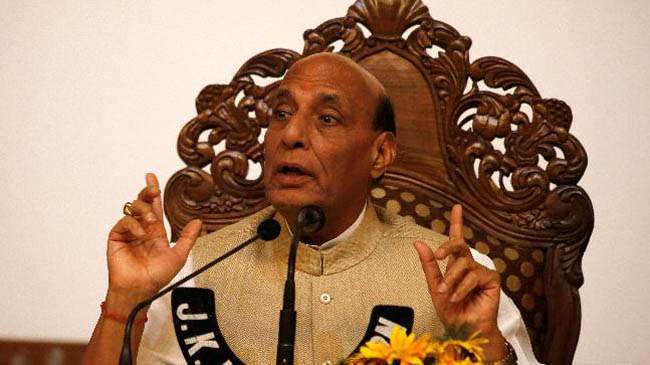 Union Home Minister Rajnath Singh has put his finger on the right spot  while identifying the challenge  that Kashmir has become over the years for the Indian nation . His analysis that “ Kashmir is a challenge because of Pakistan,” is undisputable for the simple reason that Pakistan continues to meddle into the internal affairs of India and has unleashed  not only violence but also  vitiated the narrative in the Valley. This has created an atmosphere of uncertainty in the region .

Rajnath Singh is  the one who understands Kashmir  from his regular visits to the place , interaction with the people, and also because of the feedback that he had been receiving  from the security agencies  in Jammu and Kashmir. Therefore, it should be understood in clear terms that he doesn’t speak like the other prejudiced minds that have little or no understanding of the situation in Kashmir .

There are multiple ways  that Pakistan has used to create uncertainty and instability in Kashmir to the extent that it is posing a big challenge to the Indian state to overcome the volatile situation. The current situation in Kashmir is  a complex  wheel within the wheels of complexities that has the potential to  destablise the whole of south Asia  with its vibrations  reverberating at the international level .

Why Pakistan should be interested in creating trouble in Kashmir ?  The apologists of Pakistan’s role in the neighbouring country and some of them in Kashmir trace  the origin to the two-nation theory propounded by Mohammad Ali Jinnah who worked for and insisted on a separate nation for Muslims of undivided India  for his own flawed theories . The Muslim majority character of Jammu and Kashmir  became an acute source of  Pakistan’s narrative that J&K should have fallen within its geographical and political map  boundaries . But the real reason  for Pakistan was to have Kashmir’s waters  for its plains . It is not satisfied with the  contours of Indus  Water Treaty , but wants more and more water , even from the rivers, the waters of which can be used by India in their entirety .

Rajnath Singh said “ Kashmir is a challenge because of the “ napak (disruptive ) activities of Pakistan .” This statement should be seen  and read against the historical background  of the all-out efforts  of Pakistan  to capture the  waters of Kashmir ,. It has  used  the religion and the ideology of “ jihad”  to achieve its objectives in Kashmir .

The Home Minister knows what exactly Pakistan wants , but he has  acted and articulated his statements quite responsibly . The best thing that  can be done is to expose Pakistani designs in a candid manner with all the evidence  against Pakistan – the way it is keeping Line of Control and  International Border hot , promotion of militancy .

There are two ways of overcoming the challenge  posed by Pakistan in Kashmir . One, of course, is  to embrace our own people . This phrase  needs to be translated in a  manner that could connect with the people with  a very clear message that the Indian State is accommodative of dissent  but that dissent should be natural and indigenous , like it is when the people protest against the power and water scarcity , absence of development . The outpouring of the  political dissent should be within the democratic parameters and not  at the behest of Pakistan .  Once that starts happening , the operations of the security forces would also subside  and remove a major element of confrontation  that has  many unfortunate and uncalled for consequences .

Second,  the Government of India  should  tap the youth that want to build their careers . Let them build their ambitions  as Kashmiris , and once they start doing that  much of the challenge posed by Pakistan in destablising the situation would disappear .

Everything will have to be done by the country , because as Prime Minister Narendra Modi , declared “ will not mend its ways so easily.”