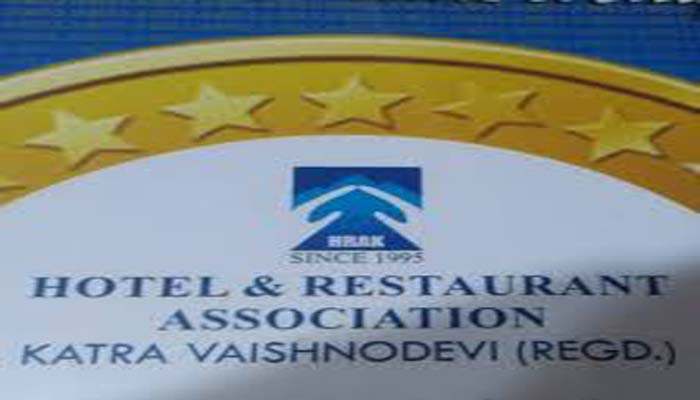 A delegation of Hotel & Restaurant Assoction Katra (HRAK) accompained by stake holders from Tourism and trade while speaking to Principal Secretary Industries & Commerce J&K  Thakur Ranjan Parkash wherein Director Industries,Jammu Annoo Malhotra was also present said that Katra and around has huge potential to attract private viable investment but the need of the hour is this that we may show the investors the projects which may add on to the Tourism potential  of our Union Territory and provide maximum employment to the people and may increase the stay of the Yatries  and make Katra and around as hub of Tourism and should be cleared in the first go.

Rakesh Wazir President HRAK & Mentor PHDCCI Jammu while speaking on the occasion said that investors are  ready for making investment in viable projects around Katra like Shiv Khori rope way,Water amusment park at Jhajjar Kotli, Light & sound on the history of Maa Vaishnodevi ji and many more on private government partnership basis and and if the things are expedieted ,we can see results within months.He further said that  since Tourism is the back bone of our Union Territory thus service Industry connected with Tourism which includes Hotels etc.constitute big component of that and is part of Industry and thus  all  Industrial Benefits needs to be extended to Tourism Sector as well  like the Industrial Power Tariff benefit which was sanctioned for the year 2018-19 for Hospitality sector by J&K Government and was further validated upto March-2019 by SAC ,that needs to be validated and extended once for all so that Hotels may get power at Industrial rates,similarly  when GST was introduced in J&K there was no VAT or any other tax on Hotels and it was assured that GST reimbursement will be made to Hotels but nothing of the sort is made till today and be started.

Shyam Lal Kesar Chairman while speaking on the occasion said that areas which are already commercial in approved master plans be not asked for changing of their land use from Agricultural to commercial from Revenue Department because once master plan is approved and Revenue Minister remains one of the signatory to it ,its deemed permission is already there in it.

Shiv Kumar Sharma Former President & Virender Kesar Sr.Vice President elaborated that some special package for most sufferer Hospitality Industry in lieu of total closure of business is need of hour and further said that there is no GST re-imbursement for units which go for substantial expansion  as is being given to new units and it should be done. They further said that interstate buses whosoever comes from out side state are stopped at lakhanpur and passengers are de boarded and then boarded in J&K SRTC buses and from there the Tourists/pilgrims comes to Jammu and from there to Katra which is main hindrance in increasing in Tourist/pilgrim in flow in our Union Territory  and is required to be modified.

Naseem Chaya & Kushal Magotra emphasized for business establishments are entited for some working capital /other loans but the court fees has been described as 1.2% of the value of mortgaged property but in some of the cases the value of mortgaged property even surpasses the loan amount and it should be either no court fee or 1.2% of the loan amount and clarification with regard should be issued at the earliest.

Sanjay Gupta, Vikas Gupta & Ashu Gupta  requested for increasing the moratorium of hotel loans which have become bad  of finding difficulty in re payment due to Covid  because Hotel Industry is the worst sufferer in Covid.