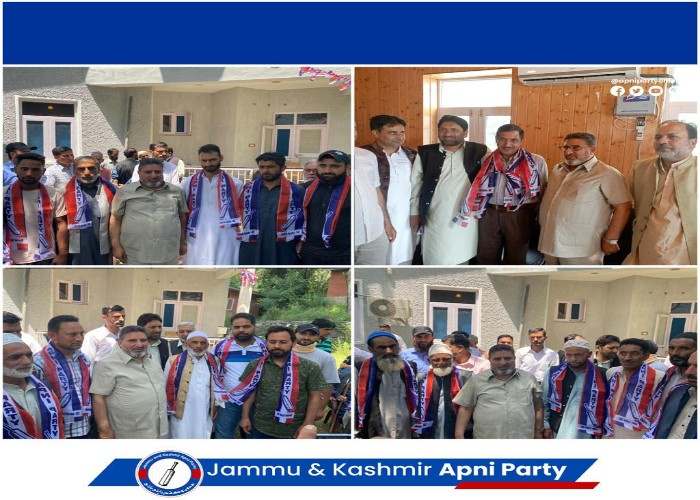 Besides large groups of Panchayat members and political workers; Congress party’s leader Abdul Qayoom Pathan along with his companions; and Raja Mukhtar Khan from Bijhama Uri, who has been associated with National Conference for the past 40 years; joined Apni Party in an extraordinary event at north Kashmir’s Uri town on Thursday.

According to a press statement issued here, Apni Party President Syed Mohammad Altaf Bukhari, who was present at the event, warmly greeted the new entrants into the party fold.

Syed Mohammad Altaf Bukhari while welcoming the new entrants into the party fold said, “I wholeheartedly welcome you into the Party. Your joining into Apni Party is very significant to us because the move indicates that you trust our unambiguous agenda and straightforward policies. And, I am sure your joining will strengthen Apni Party further in this important region of the Valley.”

He added, “I know that the successive governments in J&K have always been overlooking this region causing infrastructure deficit here and alienation to the people. Unfortunately, the so-called leaders who claimed to be the representatives of the Uri residents too have failed to lift the living standards of people in this area, over the past 75 years. But, I assure you that Apni Party will do everything to ensure prosperity and development to this border region.”

Reiterating his stance about J&K’s future, Syed Mohammad Altaf Bukhari said that he believes peace and tranquility will fetch political and economic empowerment to the people of Jammu and Kashmir.

He said, “Unless we have sustained peace here, we will not be able to achieve political and economic empowerment for the people. Thus, Apni Party will continue striving for peace and harmony in J&K.”

During his daylong stay in Uri, Syed Mohammad Altaf Bukhari met a number of delegations consisting of people from all walks of life, and social and political activists of the region. They informed the Apni Party leader about the political scenario in the border town and discussed public issues with him.

Syed Mohammad Altaf Bukhari gave a patient hearing to the delegations and assured them that Apni Party neither does believe in geographical discrimination, nor differentiates between people on the basis of their faith, religion, caste, and creed.

He said, “Apni Party’s agenda is to work for peace, prosperity and development of whole Jammu and Kashmir irrespective of its different geographical locations and without discriminating between the people of different religious faiths and political ideologies. J&K is a single unit and all of its population deserves a dignified life and all regions equivalent development.”

Besides, Congress leaders Abdul Qayoom Pathan who joined the Apni Party along with his workers and supporters, several Panchayat representatives and political activists entered into the Party’s fold in presence of Syed Mohammad Altaf Bukhari.

The prominent among the new entrants include Congress party’s leader Abdul Qayoom Pathan; Raja Mukhtar Khan from Bijhama Uri, who has been associated with National Conference for the past 40 years; Mohammad Yousuf Lone from NC; Sarpanch Mareed Hussain; Raja Lateef Khan Sarpanch in Chalan Banyal from Congress party.