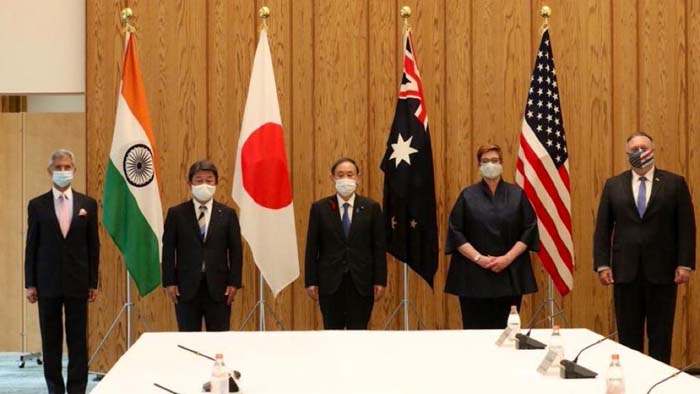 India is cool , calm and confident in its foreign policy that believes rule-based international order . Foreign Minister S Jaishankar ‘s opening remarks at the start of the Quad meeting of foreign ministers of the member states made it evident that despite the adverse situations on borders- a five-month-long stand off in the Himalayan heights with Chinese troops and daily unprovoked firing by Pakistani army from across the line of control , India stands firm on its principles .

Though Jaishankar did not name the states involved in the acts of aggression, maintaining dignity with which India conducts its diplomacy , the message was subtle and clear. It might have unnerved Beijing and Islamabad , but the tone and tenor of the foreign minister at Quad meet in Tokyo, Japan, on Tuesday was full of confidence .

Jammu and Kashmir and Ladakh union territories are experiencing the hostile attitude of neighbours- J&K at the LoC from incorrigible Pakistani side , and Ladakh at LAC with China . These pose a serious challenge to the national security, as the aggressive and hostile action of China and Pakistan on the borders are threatening peace in the region .

Emphatic statement by the foreign minister that ,” events of this year have clearly demonstrated how imperative it is for like-minded countries to coordinate responses to various challenges that the pandemic has brought to the fore.” The “ like-minded countries” underlines the importance of the democratic countries that the member states of Quad are- the United States of America, Australia, Japan and India. The real democracies are bound by a thread of accountability in the international relations . At the same time, Jaishankar without speaking a word about the other countries , he hit hard at the countries like China and Pakistan where people’s will is subjugated by the authoritarian regimes.

Very subtly the Foreign Minister told the world that India is going to assume membership of the United Nations Security Council next year . this clearly meant that India has its standing in the world institutions , where it is going to seek “ collective solutions to collective challenges.”

“As wide-brimmed and pluralistic democracies with shared values, our nations have affirmed collectively the importance of maintaining a free, open, and inclusive Indo-Pacific. We remain committed to upholding the rules-based international order underpinned by the rule of law, transparency, freedom of navigation in international seas, and respect for territorial integrity and sovereignty and peaceful resolution of disputes,” this part of the statement brought out India’s intentions not to compromise on its territorial integrity and sovereignty . This was a message that must have echoed loudly in Beijing and Islamabad .

“ Our objective remains advancing the security and the economic interests of all countries having legitimate and vital interests in the region. It is a matter of satisfaction that the Indo-Pacific concept has gained increasingly wider acceptance. The Indo-Pacific Oceans Initiative that we tabled at the East Asia Summit last year is a development with considerable promise in that context,” these contents have spotlighted that democracies work for the collective benefit by their efforts and reach , and that doesn’t necessarily mean that they are arraying against any country or block.

And, Jaishankar unveiled the universal outlook of the Indian diplomacy , when he said : “I look forward to our ( Quad foreign ministers) discussions on important issues such as connectivity, infrastructure development, security including counterterrorism, cyber and maritime security, health cooperation, and the stability and prosperity of the region.”