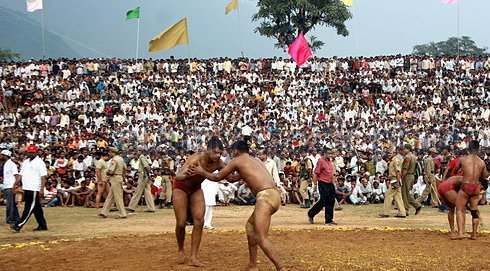 Cross-border shelling, Uri Attack and deteriorating Indo-Pak ties has claimed denial of  Pakistani wrestlers to participate in the annual ‘dangal’ (bout) to mesmerize the audience from all over the world during Navratra festival on the foothills of Mata Vaishno Devi Shrine at Katra.

Navratra festival is the biggest appearance for the pilgrims who visit from different parts of country and abroad to pay obeisance at the shrine of Mata Vaishno Devi and wrestling event under Mission Dosti is the biggest show of the festival wherein over 20000 people watch the bout in the stadium.

Jammu and Kashmir Indian Style Wrestling Association, which is organizing the event, has omitted Pakistan and instead invited the wrestlers from England, Georgia and Ukraine to participate in the annual bout to be held on 9th Navratra on Sunday.

“This year we have not invited Pakistani wrestlers amidst the situations after the firing on the borders and Uri attack by Pakistan sponsored militancy”, said Shiv Kumar Sharma, president, Jammu and Kashmir Indian Style Wrestling Association.

Started in 2005, Mission Dosti Dangal was aimed at building bridges with Pakistan through the medium of sports and despite the terror attacks and grave provocations by Pakistan, the Mission Dosti continued in a never-ending style till 2012 but later it was stopped.

“For the first time since 1947 wrestlers from Pakistan came to participate in the bout in 2005, which lead to great enthusiasm for the audience”, said a wrestling lover of Bisnah, Jammu.

The wrestling lovers of the state wait anxiously every year to see the State’s biggest Wrestling event wherein the foreign players are the main attraction and this year four wrestlers from Georgia, England and Ukraine will add another feather to its cap but the Pakistani wrestlers were excluded of the competitions.

It is pertinent to mention that a Dangal competion will commence on 7th October at Holy place Mathwar in Tehsil and District Jammu near Akhnoor wherein the two free style Wrestlers from Georgia namely Lavan Berianpze, 125 Kgs Bronze Medalist at world Wrestling championship at Moscow in 2010 and Wrestler Giorgi Sakandelpze, 125 Kgs are also going to compete for 1st and 2nd malli bout in the Dangal.

The inauguration function of the competition shall be held at 1 pm at Baba Ballo Dev Shathan Mathwar and conclude at 5.30 pm.

Later the same wrestlers will be seen competing at Katra Maha Dangal organized by India Style Wrestling association under Mission Dosti at Katra on 9th of October.