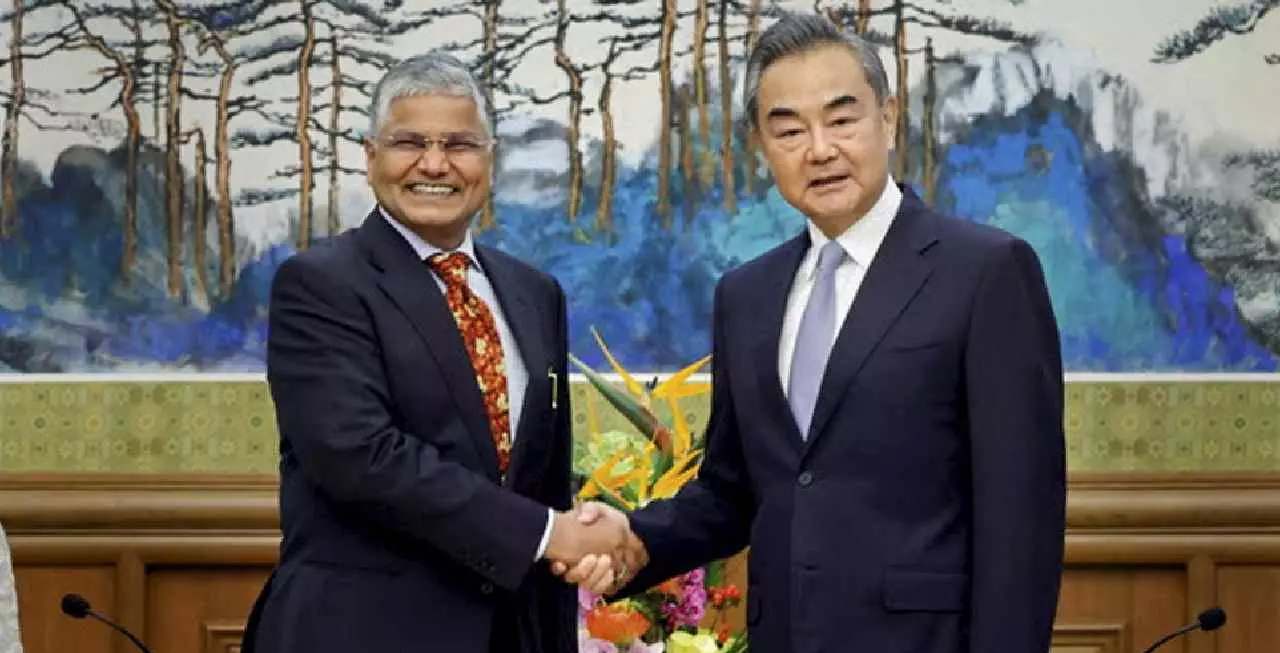 Indian Ambassador to China Pradeep Kumar Rawat has met Chinese Foreign Minister Wang Yi ahead of the BRICS summit and emphasised the “criticality of maintenance of peace and tranquillity in the border areas” to realise the full potential of the consensus between the top leaders of the two sides on the importance of Sino-India ties for Asia and the world.

Rawat made a “courtesy call” on Wang on Wednesday at the Diaoyutai State Guest House here – his first meeting with the Chinese Foreign Minister after he took charge as India’s new envoy to Beijing in March, a press release issued by the Indian Embassy here said on Thursday.

“Bilateral and multilateral issues of interest to both sides were touched upon during the conversation” between Rawat and Wang, who is also the State Councillor – a high-level rank in the ruling Communist Party of China (CPC), it said.
“Wang Yi conveyed that at the highest level of leadership of the two countries, there is consensus on the importance of bilateral relations for Asia and the world,” the release said.

“Ambassador agreed and emphasised the criticality of maintenance of peace and tranquillity in the border areas for realising the full potential of this consensus,” it said.
“Wang Yi said that the border issue is important and we should stay committed to peacefully addressing it through consultation and coordination,” it said.

Their meeting on Wednesday assumed significance as it came ahead of Thursday’s virtual BRICS summit hosted by President Xi Jinping which Prime Minister Narendra Modi is due to take part.
The meeting is also significant as it took place amidst the chill in bilateral ties over the two-year military standoff in eastern Ladakh.

As a result of military-level talks, the two sides completed the disengagement process last year on the north and south banks of the Pangong lake and in the Gogra area. India has been consistently maintaining that peace and tranquillity along the Line of Actual Control (LAC) are key for the overall development of the bilateral ties.

During talks with Rawat, Wang recalled his meeting with External Affairs Minister S Jaishankar in New Delhi in March this year.
Wang “mentioned that the Chinese side attached importance to the Indian side’s concerns regarding the return of Indian students and that he hoped to see early progress on this,” the release said.

He also referred to the discussions on resumption of direct flight connectivity between the two sides, it said.
“Rawat conveyed that the relevant agencies in India are seized of the matter and we may see progress in the matter soon,” it said.
“There was agreement that the two sides should make full use of the opportunities provided by multilateral meetings to continue their exchange of views including between the two Foreign Ministers,” it said.

Thousands of Indian students stranded at home for the past two years due to China’s COVID visa bans were anxious to return to China and re-join their studies.
In April, China agreed to permit the return of “some” stranded Indian students and asked the Indian Embassy here to collect the details of the students wanting to return.

Over 12,000 Indian students have reportedly expressed their wish to return and their details have been forwarded to the Chinese government for processing. About 23,000 Indian students are studying in Chinese universities, mostly in medical courses.
Last week, China announced plans to provide visas to Indian professionals and their families working in various Chinese cities who are stuck back home for over two years due to Beijing’s COVID visa bans.
On Rawat’s meeting with Wang, a Chinese foreign ministry statement quoted Wang as saying that the common interests of China and India far outweigh their differences, adding that the two sides should support rather than undermine each other, strengthen cooperation rather than guard against each other, and enhance mutual trust rather than be suspicious of each other.

The Chinese foreign minister said the two sides should meet each other halfway to push bilateral relations back onto the track of stable and healthy development at an early date, jointly address various global challenges, and safeguard the common interests of China and India as well as the vast number of developing countries.

He called on both sides to adhere to the important strategic consensus reached by the leaders of the two countries, insist on placing the border issue in a proper position within bilateral ties, and seek solutions through dialogue and consultation.
China and India should also give full play to their traditional advantages in people-to-people and cultural exchanges, continuously expand mutually beneficial cooperation, and work together to create a better future for mankind, the state-run Xinhua news agency quoted Wang as saying.

China holds this year’s chair of the five-member bloc comprising Brazil, Russia, India, China and South Africa.
On Wednesday, Xi and Modi along with other heads of the BRICS countries addressed the BRICS Business Forum.
Wang visited India in March during which he held talks with Jaishankar and National Security Advisor Ajit Doval.

During the meeting, Rawat “conveyed his appreciation for this opportunity for him to have an in-person meeting with Wang Yi in spite of Covid-19 related limitations”, the Indian Embassy press release said.