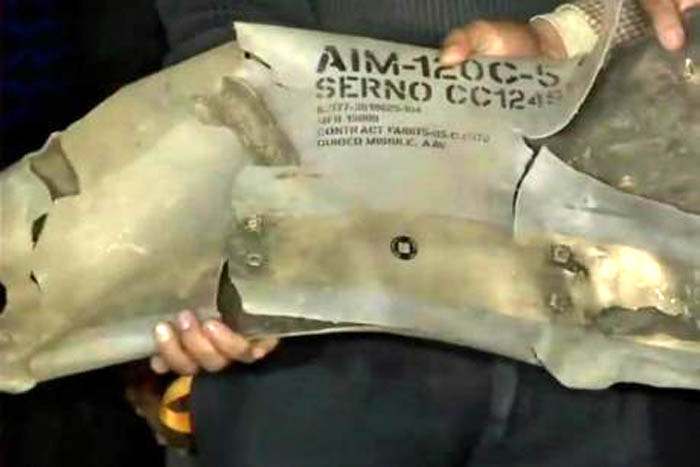 The AIM-120 Advanced Medium-Range Air-to-Air Missile (AMRAAM) missile, manufactured by American firm Raytheon, is available in many variations, and has been sold to many countries including Taiwan, Finland, the UAE, Turkey and Pakistan.

A day after Pakistan claimed it never used American F-16s in its attempted air strike on military installations in the Rajouri sector, India Thursday presented parts of a fired AMRAAM missile which can only be fired from an F-16 aircraft.

“There is enough evidence to show that F-16s were used in this mission and Pakistan is trying to hide this fact. Also, parts of AMRAAM air-to-air missile, which is carried only on the F-16s in PAF, were recovered east of Rajouri within Indian territory,” Air Vice Marshal R G K Kapoor said at a joint briefing by the armed forces where parts showing the cover and serial number markings were displayed.

The AIM-120 Advanced Medium-Range Air-to-Air Missile (AMRAAM) missile, manufactured by American firm Raytheon, is available in many variations, and has been sold to many countries including Taiwan, Finland, the UAE, Turkey and Pakistan. This missile can only be fired from F-16s which are among the aircraft of the PAF.

MRAAM missiles allow a fighter pilot to target an enemy aircraft that is beyond visual range, in day or night, and in all weather conditions. The AMRAAM has an autonomous guidance capability, which allows the pilot to manoeuvre immediately after missile launch.

Pakistan agreed to buy about 70 F-16s in the 1980s, and about 40 were delivered before Congress cut off all aid and military sales in 1990, citing Pakistan’s secret development of nuclear weapons under the Pressler Amendment.

In 2006, Pakistan was a major recipient of American arms sales, including the $1.4-billion purchase of up to 36 new F-16C/D fighter aircraft and $640 million in missiles and bombs. The deal included a package for $891 million in upgrades for Pakistan’s older F-16s.