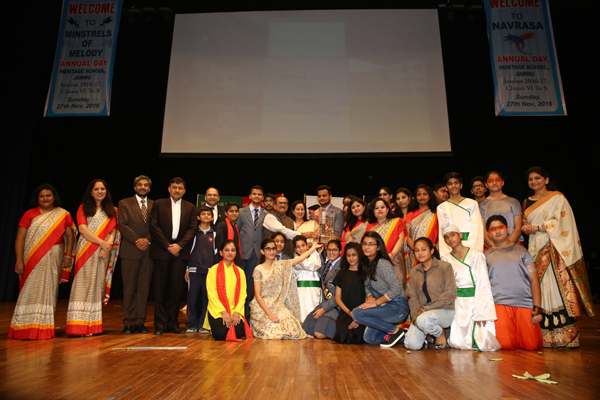 It was a day of days as the Heritage School Jammu celebrated its 12th annual day ‘NAVRASA’. The audience partook in a spectacular visual delight put up by the students.

Nirmal Singh, Deputy Chief Minister graced the occasion as the Chief Guest and the guests of honour were Sat Sharma, State President BJP, J&K and Vibodh Gupta MLC Rajouri and Shaleen Kabra, Commissioner Secretary Education, J&K. The event was also graced by luminaries, a bevy of special invitees and parents.

The programme commenced by a welcome speech that was followed by the lighting of the auspicious lamp. Thereafter, the audience was enthralled by the soulful renditions of the school band, ‘Minstrels of Melody.’ The highlight of the day was the cultural programme that was a well knitted saga of Navrasa -emotions that lead to interconnect. The journey of a little girl ‘Hope’ from numbness to inner connect begets her, the nine emotions that interplay to influence her.  The audience were not mere spectators but experienced a transcendental evolution to rediscover inner harmonies.

Meritorious students who secured 10 CGPA were awarded with certificates & cash prizes of Rs.10, 000 each by Dhanwanti Memorial Trust under the patronage of Mrs Nirmal Gupta, senior member of the management board of trustees.

Best debater prize went to Mrigu Sambyal. Sparsh Jandial and Sajjal Raina were chosen as the best quiz brains. The winners of the prestigious Vice-chancellor’s rolling trophy for visual and performing arts were also felicitated.

The most coveted Governor’s rolling trophy for excelling in various inter-house competitions was lifted by Legacy house.

Rhythm Babbar, the school topper for the year 2015-16 was the proud recipient of the prestigious silver medallion for her outstanding performance in class XII board exams.

Dy. CM in his address was all praise for the efforts of the students and extended his best wishes to the Heritage family. He stressed on the role of the school education in shaping the holistic personality of the future generation that holds peace, goodwill, brotherhood and humanity above everything else. He opined that the 21st century belongs to Asia and more so to India which has 65% population less than 35 years. He also emphasized that Jammu will be a major educational hub with the advent of AIIMS,IIT and IIM which will provide further impetus to education in J&K.

J.S. Dhami, Principal, presented the vote of thanks and stressed upon the idea that children are the assets of our nation and schools must inculcate in them right attitudes and values that ensure them a rightful place in the society and hence all efforts of school activities are directed in such a manner that Heritageans, besides carving a niche for themselves prove to be beacon lights to those who are standing at the cross roads.

Mementos were presented to the esteemed guests and the gala evening ended on a high note with National Anthem.

Schools should be reopened in staggered way, suggests AIIMS director