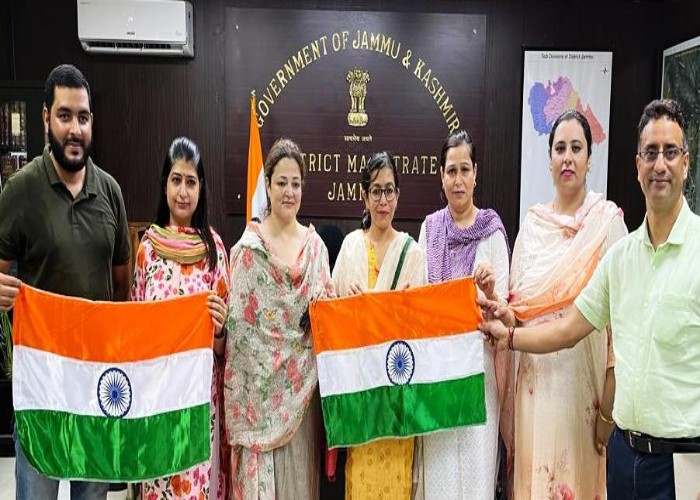 More than Three Lakh National Flags have been distributed in district Jammu as the district machinery gears up for the ‘Har Ghar Tiranga’ campaign to commemorate the 75th year of India’s Independence.

Tricolours will be flown at every private and commercial establishment as part of the 75th anniversary of the country’s Independence from 13th to 15th August 2022.

Fifty thousand tricolours have been prepared locally by 3500 Self-Help Groups of the district under the Jammu & Kashmir State Rural Livelihoods Mission (Umeed).

For hassle-free distribution, the district administration has made the Tiranga available at the Block Development Offices, Rations Depots and with the sanitation supervisors, which the people can get at Rs 20. Besides, Tiranga has also been made available at all the government and private schools in the district.

The campaign, being conducted under the overall supervision of Deputy Commissioner Jammu Avny Lavasa, has witnessed a series of awareness activities across the district.

Chief Education Officer Jammu has organized awareness activities involving all the schools of the district through essay competitions, National Anthem singing competitions and Rangoli competitions based on the themes of freedom struggle, Ideas and actions @75 that have shaped India and achievements@75 showcasing evolution and progress across different sectors.

Awareness Rallies taken out by the school children holding the National Flag were also witnessed across the district. A mega rally was also organized by school children from Ragunath Mandir to Mubarak Mandi.

The Rural Development Department conducted special Gram Sabhas to generate mass awareness in rural areas about the Har Ghar Tiranga campaign. The department also distributed the National Flags in rural areas through Block Development offices and public representatives. Activities to promote Amrit Sarovars have been launched in each block of the district.

The district administration has also launched a photo with the Tiranga competition where citizens from Jammu can click a picture with Tiranga and share it with the official Twitter handle of DC Jammu. The winner of the event will be awarded a surprise gift. Besides, video messages from prominent personalities including sportspersons have also been highlighted by the administration requesting citizens to hoist the national Flag on the rooftop of their homes.