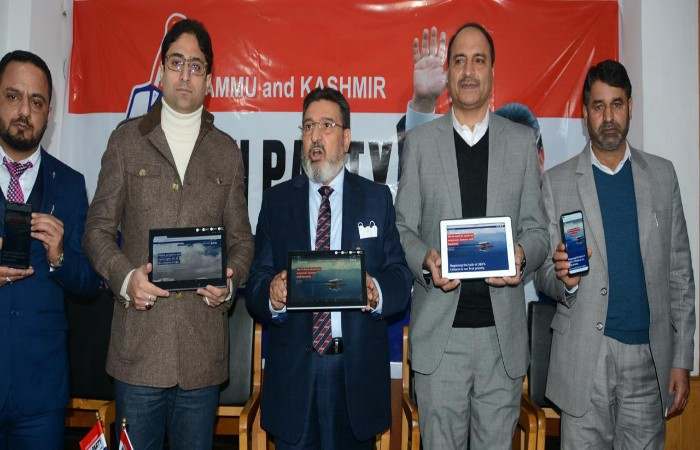 Jammu and Kashmir Apni Party on Monday observed its first foundation day at its Party office in Srinagar wherein the Party President Syed Mohammad Altaf Bukhari addressed an impressive function. Besides celebrating its first anniversary in Srinagar, the Party convened similar functions at all the district headquarters in Jammu and Kashmir.

Earlier addressing the media-persons at the Party office in Srinagar, Bukhari highlighted some of the main public interest issues raised and pursued by the Party leadership during the last one year. On this occasion, Bukhari also launched Party’s website: https//jkapniparty.com. He appealed to the people especially the youth of Jammu and Kashmir to visit the site which is compatible on mobile as well to assess the Apni Party’s vision, mission and day to day based activities.

Felicitating the people on International Women’s Day which coincides with the foundation day of Jammu and Kashmir Apni Party, Bukhari expressed deep disappointment over the plight of a large section of women in the society.

He appealed to the people to give proper respect, dignity and ensure the women get their rights exercised in letter and spirit.

On the formation, objectives and achievements of Jammu and Kashmir Apni Party since its inception, Bukhari recalled the commitments made during this period and the results achieved on the ground.

On the demand of restoration of Statehood to J&K, Bukhari appealed to the government of India not to delay the fulfillment of a commitment which has been made on the floor of Parliament.

He said that people of J&K are presently being governed by a thick skinned bureaucratic set-up that hardly has a sense of belonging with this land or have any other motivational factor to get identified with the pressing problems and sufferings faced by the people.

“People of J&K are deeply distressed in absence of an elected government. The bureaucratic setup presently governing Jammu and Kashmir have increased the miseries of the people that can now only be addressed through a democratically elected regime,’’ Bukhari remarked.

He said the number of demands pertaining to the public interest raised by Apni Party during the last one year have witnessed significant progress.

“History shall bear witness that without being part of any power structure, whatever we have achieved with regard to our demands raised during the last one year is the result of our honest and truthful political approach and the immense support of the people of Jammu and Kashmir,’’ Bukhari observed.

He also expressed that the people of Jammu and Kashmir deserve to enjoy equal rights like their fellow citizens in the country. “The government of India should not waste any more time to reciprocate to the unaddressed yearning of people of J&K who want peace, progress and prosperity in this region,” he said

Bukhari at the end of the press conference further appealed to the Prime Minister and Union Home Minister of the country to fulfill their commitment on restoration of Statehood and holding assembly elections in J&K without any further delay.

Meanwhile, the party leadership both from Jammu and Kashmir provinces addressed the conventions held at various district headquarters wherein they reiterated party’s commitment to the socio-economic and political empowerment of the people of Jammu and Kashmir.

Art 370 will not be removed by their removal : Mustafa Kamaal