Jan Abiyaan is a way towards building Public Trust and strengthening the relationship with people : Advisor Baseer Khan 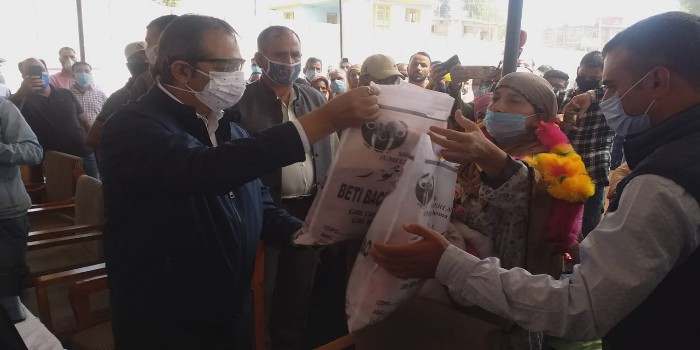 Back to village is a way towards building public trust besides strengthening the relationship with people w stated Advisor Baseer Khan while attending the last phase of Block Divas Day in Awantipora. He said that Jan Abhiyan is aimed at to improve service delivery and redress the public grievances within the shortest possible time and achieve cent percent saturation of beneficiary oriented schemes. He added that the aim purpose behind the Jan Abiyaan is to strengthen the roots of good governance in J& K and empower the common people besides giving direction to new governance model adopted by UT Government.

He visited the Block Awantipora today on the eve of last phase of Diwas being celebrated all across J&K . He was accompanied by Additional Deputy Commissioner , Awantipora and SSP Awantipora besides other district officers .

In Awantipora block the Advisor inspected the stalls installed by different departments and enquired about the greviance redressal mechanism being adopted to satisfy public.
He interacted with hundreds of people who have visited the Block Divas and listened to their issues and grievances. He also distributed sporting kits among School children , income and domilcle certificates.
He also handed over Baby Kits to newly born girl children under BBBP besides distribting sanction letters under Ladli Beti Scheme.
He also distributed wheel chairs , hearing aids , walking sticks among the persons with disabilities.

A delegation from Gujar bakerwal community macadamization of roads , upgradation of primary school to high school.