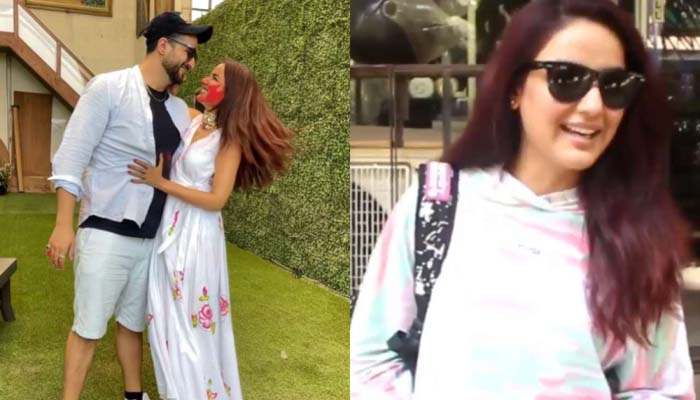 Actor Jasmin Bhasin has responded to questions about her marriage plans with boyfriend Aly Goni. The Bigg Boss 14 alumnus are often spotted together on dates and dinners by the paparazzi in Mumbai.

On Tuesday, the paparazzi spotted Jasmin outside a salon. They got her to pose for the cameras and even asked her to reveal her marriage plans with Aly. “Possible hi nahi hai. Abhi toh humari koi baat nahi chal rahi. Abhi toh naya naya pyar hua hai (It’s not possible. Even we haven’t discussed it. It a fresh new romance),” she said to the photographers.

Aly was among the top five finalists on Bigg Boss while Jasmin was voted out. The show was ultimately won by Rubina Dilaik. During an AMA session with Aly, a fan asked him, “Sach batana aapko jasmin se pyaar BB se pehle hi hua tha na but aapne kabhi bataya nahi (Please tell me, you loved Jasmin before Bigg Boss happened but never told her, right).”

He replied, “Pyaar toh humesha se tha. Vo hai hi itni pyaari. Bass pehle dosti mein tha fir dusra vaala hua (Love was always there. She is just so lovely. At first love was in the form of friendship and then the second one happened).”

Asking about Aly’s proposal to Jasmin, another fan wrote, “Just wanna remind u of the Iceland trip where our jas wants the proposal Tho u and me want the same that jas shld propose first,coz I wanna badly see her cute proposal (if we get to see).” To this Aly replied, “Thoda COVID Vaala scene settle ho jaaye fir karte hai plan (Let the COVID pandemic settle down and then we can plan).”

Aly and Jasmin recently appeared in the music video for Tony Kakkar’s Tera Suit. The song has been a big hit with their fans.