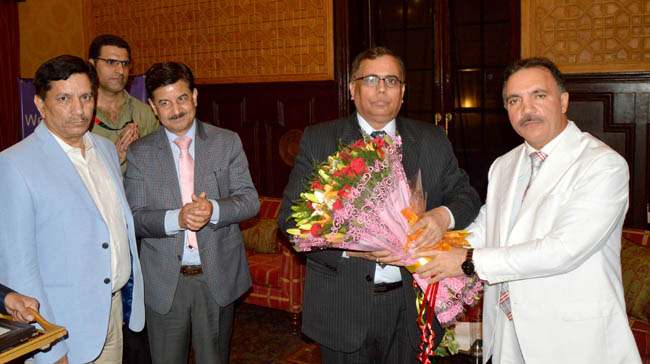 J&K Bank gave a warm send off to its Executive President Vagesh Chander, who attained superannuation after serving the bank for over three decades at various key positions.
Chairman and CEO Parvez Ahmed along with Executive Presidents Pushap Kumar Tickoo, Rajesh Kumar Chibber, Presidents, Vice-presidents and other senior officers attended the farewell held at the bank’s Corporate Office.
Throughout his service career that spanned over three decades, Vagish Chander has played an important role in different capacities in the growth and development of the bank. He was currently among other departments heading the bank’s Human Resource Development Department.
Speaking on the occasion, Chairman Parvez Ahmed said, “People like Vagish Chander are rare now. He was one of the most gentle and humble officers who served the bank utilizing all his capacities and with exemplary dedication. In that sense, he was one of our pioneering officers to have contributed richly to the growth of this bank.”
The chairman while praising his humility and humble nature said, “Now it is the responsibility of new leadership along with the younger officers to carry forward such rich legacy towards new heights.”
Thanking the bank and his longtime colleagues Vagish Chander said, “I feel immensely indebted to this great institution for everything I have learned and earned during these memorable years of my life.”
“I extend my heartfelt gratitude to all my colleagues who worked with me and gave me wonderful memories to cherish for the rest of my life.”