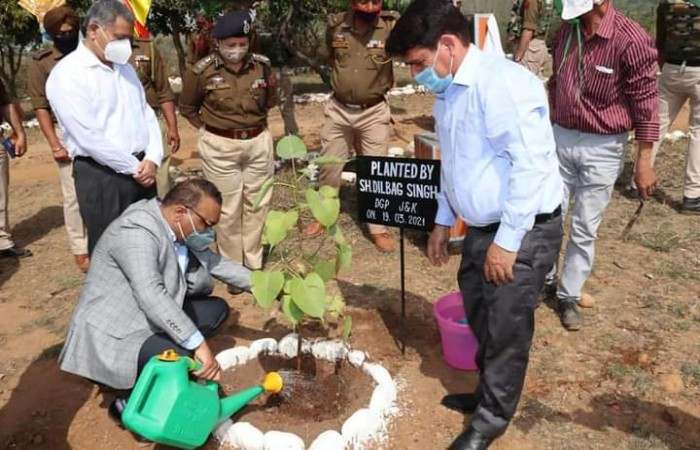 Earlier on his arrival, the DGP was received by ADGP Armed J&K, Shri A.K. Choudhary, SSP Jammu, COs of different Jammu based battalions, AIsG of PHQ and engineers of Police Construction Division.  The DGP J&K Shri Dilbag Singh, ADGP Armed, J&K Shri A.K. Choudhary and other police officers planted fruit and Peepal Saplings in the campus.

On this occasion, the DGP in his address congratulated ‘Peepal Saves People Foundation Trust’ for taking up the pious initiative of planting the Peepal trees and said that Jammu and Kashmir Police will provide support to the foundation as and when required. He said that trees are very important part of our lives and they not only satisfy the needs of humans but contribute in huge ways to the environment. He said that the trees which were planted in campus today will provide refreshing and pleasing environment in coming times for the Jawans here. He informed that Jammu and Kashmir Police has launched plantation drives at a number of police complexes across Jammu and Kashmir.

The DGP said that trees and forests are considered as an integral part of the Indian culture and planting of trees is regarded as a divine act. He said that planting trees should be adopted and encouraged to protect our environment.  Recalling his childhood days, the DGP said that trees were great source of enjoyment, exercise and playing activities. The Peepal and Banyan trees are in fact embedded in our childhood memories, the DGP added.

Earlier, the founder president of ‘Peepal Saves People Foundation Trust’ Shri Pritam Singh gave detailed briefing regarding the work of the foundation. He said that more than 7000 peepal saplings have been planted in schools, colleges, universities, hospitals, police, army areas, government and other public places in Jammu and Kashmir. He said that the main objective of planting Peepal saplings is to create environment free from pollution.

Commandant IRP 14th Bn Ms Anita Sharma in her welcome address thanked the foundation for taking up plantation drive in the Police training campus. She thanked the DGP for launching the plantation drive. She also briefed about various training programmes conducted in the centre.

Later on speaking to the media, the DGP said that elements inimical to peace are making repeated attempts to disrupt the peace in Jammu and Kashmir and added that J&K Police along with other security agencies are capable enough to thwart their evil designs. He said that recently two top terror commanders were killed in North Kashmir and South Kashmir and other two top commanders of newly created terrorists outfits have been arrested.

The DGP said that it has been our effort to bring back misguided youth and in last year only around three dozen of youth with the support of their parents were brought back. He said that Police and security forces are providing chance to surrender even during live encounters and in 2020 around a dozen of them surrendered.  He informed this year so far twelve terrorists have been eliminated and around three dozen of terrorist associates of different modules have been arrested.