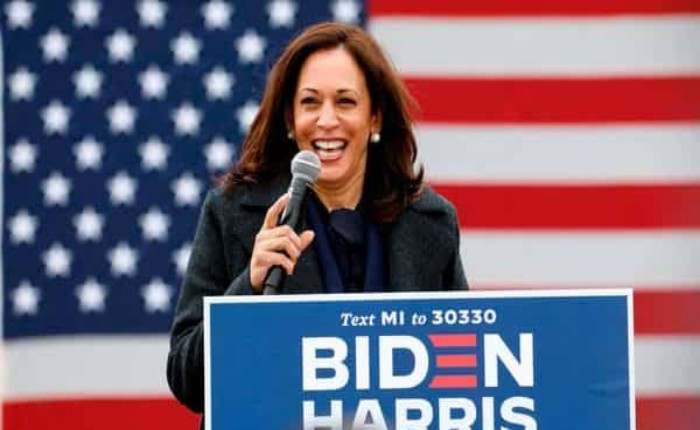 Kamala Harris became the first female vice president in American history on Wednesday at the inauguration of Joe Biden as the 46th president of the United States.

Harris’ appointment is historical on many levels, as she breaks the glass ceiling in politics for women in the executive branch.

Aside from being the first woman to take office as the vice president of the United States, Harris — the daughter of a Jamaican American father and Indian American mother — is the first Black woman and the first Asian American to step into the role.

Harris’ husband, Doug Emhoff, an entertainment attorney, is the first Jewish spouse of any U.S. vice president and also becomes the first-ever Second Gentleman in the country.

Harris’ political career has been full of history-making moments. In 2016, she became just the second Black woman ever elected to the Senate, succeeding Barbara Boxer. A native of Oakland, Calif., Harris served as San Francisco’s district attorney and then advanced to attorney general for California.

Harris’ appointment as veep comes more than 35 years after Geraldine Ferraro became the first female candidate for vice president on a major party ticket when she ran alongside Democrat Walter Mondale in his unsuccessful effort to unseat President Ronald Reagan in 1984.

Biden pledged to select a woman as his running mate early on at the Democratic primary debate in March 2020. Several other women were considered top contenders for the ticket, including former ambassador Susan Rice, Rep. Karen Bass, Gov. Gretchen Whitmer, Sen. Elizabeth Warren, Sen. Tammy Duckworth and Sen. Amy Klobuchar, who bowed out in June, saying that a woman of color should get the job.

Harris has deep ties to the entertainment industry, thanks to three statewide campaigns in California, and her presidential run last year drew heavily on Hollywood dollars.

Since her and Biden’s victory, celebrities have praised Harris far-and-wide with notable women in Hollywood saluting the historical moment for future generations of female leaders. Priyanka Chopra wrote, “Dream big girls! Anything can happen!” and Reese Witherspoon posted, “Thinking about all those who shattered glass ceilings and paved the way for a woman to finally be Vice President of the United States makes me so emotional;” Lady Gaga, who performed the national anthem at the inauguration, posted on Instagram, “Love for our new Commander in Chief and the 1st female VP elected to the White House;” and Mindy Kaling posted a photo of Harris as a child, writing, “Crying and holding my daughter, ‘Look baby, she looks like us.’”

Ever since Biden selected Harris as his running mate, viral videos have emerged and have captivated national news coverage, depicting moments of young girls around the country reacting with joy to a woman — and a woman of color — becoming America’s first-ever female vice president.

In Nov. 2020, as she and Biden claimed victory after the election, Harris gave a radiating speech, beaming from the stage: “While I may be the first woman in this office, I won’t be the last. Because every little girl watching tonight sees that this is a country of possibilities.”

On Wednesday morning, while addressing the nation from the Capitol, Biden said, “Here we stand, 108 years ago at another inaugural, thousands of protesters tried to block brave women marching for the right to vote — and today, we marked the swearing in of the first woman in American history elected to national office: Vice President Kamala Harris. Don’t tell me things can’t change!”