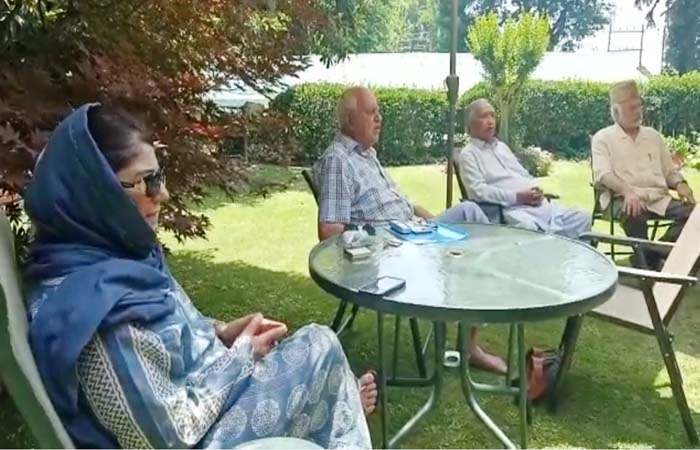 A number of Kashmiri Pandit community deputations met  People’s Alliance for Gupkar Declaration ( PAGD)  on Saturday and sought its help in making the community feel secure as also to air their grievances before the government.

Kashmiri Pandits rattled by the killing of one of their community members Rahul Bhat in Chadoora tehsil office in Budgam district on Saturday, have been agitating for their security , and immediately  after the killing  there were protests , some of which were lathi charged and teargassed by the forces . This has further jolted the community that was expecting  a reach out  from the government but was subjected to force .

They met the PAGD leadership comprising two former Chief Ministers  Farooq Abdullah , president of National Conference and Mehbooba Mufti, president of PDP, and others  and listed their woes before them.

Mohammad Yusuf Tarigami, spokesperson for the PAGD, told media that the community was shattered by the killing of the Kashmiri Pandit Rahul Bhat and wanted  that a secure environment  be created for them to work as also accommodation where they and their families feel secure.

“We understand that there is genuine fear in the community, after all, they have seen the killing of their community members .We stand in solidarity with them and will exhort the civil society to take it as a wake up call and address the issue in unison to save our land from getting soiled by the blood that , too, when tourists were coming to the Valley.”

Tarigami also stated that the PAGD will bring all these issues which have added to the fear and uncertainty of the Kashmiri Pandit community to the notice of Lieutenant Governor Manoj Sinha and press for the redressal of the same.