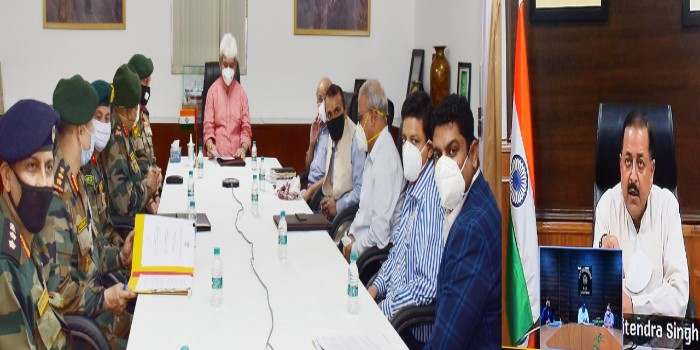 ‘Airstrip would provide a vital connectivity to the District to benefit both Defence personnel and Civilians; besides giving a fillip to the socio-economic development of the region’: Lt Governor

The Government of Jammu & Kashmir and Army today signed a Memorandum of Understanding (MoU) for development and operationalization of Airstrip in Kishtwar.
Brig. Vikram Bhan, Commander, 9 Sector RR and Sh. S.Katoch, Commissioner Civil Aviation signed the MoU in the presence of Lieutenant Governor, Manoj Sinha and Dr. Jitendra Singh, MoS PMO, Ministry of Personnel, Public Grievances and Pensions, Department of Atomic Energy, Space, Ministry of Development of North Eastern Region (through video conferencing) here at the Raj Bhavan.
Sh. BVR Subrahmanyam, Chief Secretary; Sh. Nitishwar Kumar Principal Secretary to Lt Governor; Sh. Sanjeev Verma, Divisional Commissioner, Jammu; Sh. M Raju, Secretary to the Government, Civil Aviation Departments, Sh. Achal Sethi, Secretary to Government, Department of Law, Justice & Parliamentary Affairs and other senior officers were present on the occasion.
Lt Gen. YK Joshi, GoC-in C Northern Command; Lt Gen. Harsha Gupta, GoC 16 Corps; Col. Rajneesh Giri, and Col. AK Panwar represented the Indian Army.
The Lt Governor observed that the Airstrip would provide a vital connectivity to the Kishtwar District to benefit both Defence personnel and Civilians, even during the severe winter conditions and for medical & other emergencies, besides giving a fillip to the socio-economic development of the region.
Pertinently, the issue of operationalizing the airstrip was pending since 2018.
As a result of commitment and perseverance of the government, the district, which lies at more than 210 km’s from the nearest airport in Jammu, has been provided with the golden opportunity to mitigate the sufferings of the people through the ambitious project, he added.
Highlighting the benefits of developing Airstrip at Kishtwar, the Lt Governor observed that the said project is aimed to benefit around 2,50,000 people of Kishtwar district.
The Lt Governor hoped that the project would deliver the desired results like increasing per capita earnings in district, owing to higher tourists influx which will facilitate better and quick transport facility through operationalization of airstrip; Better Health Indicator (HDI)-low mortality rates- the speedy and crucial transfer of patient to better equipped Jammu hospital will be possible and this will reduce the time taken to travel from 08 hours to less than 30 minutes; Better monitoring and administration of the district-the reduction in travelling time (for frequent meetings in Jammu) will leave officers of the district with more time to spare for the public and Integration of people with the main land, large parts of district remain out of bounds for the normal people, even the residents find it difficult to commute from such far flung areas.
The meeting was informed that in November,2017, under UDAN (Ude Desh Ka Aaam Nagrik) Phase-II Regional connectivity scheme launched by Government of India that aims to make unserved / underserved airports in small cities operational with regular flights and other subsidized airfares to encourage more people to fly, Kishtwar district of UT was included among 24 other districts.