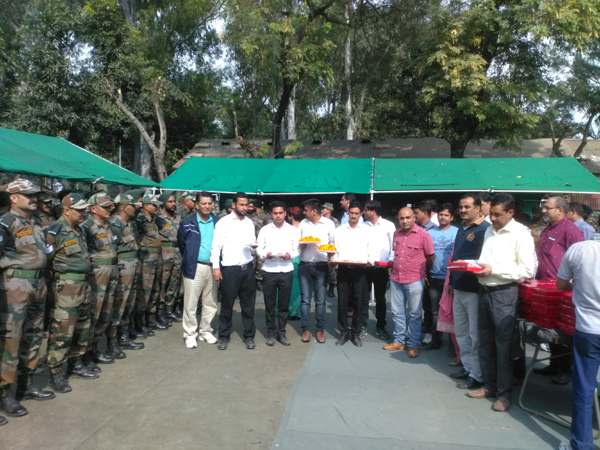 Kashmiri Pandits joined Mahraja Hari Singh Agriculture Collegiate (MHAC), Maharaja Harisingh DAV Centenary School, Akhnoor, and DAV Society New Delhi to celebrate this year’s Diwali with Army and BSF soldiers guarding Akhnoor sector as a mark of respect for their sacrifice towards the safety and security of the nation.

The Kashmiri Pandits under the banner of All Parties Migrants Coordination Committee (APMCC) joined hands with the management of MHAC, Maharaja Harisingh DAV Centenary School, Akhnoor, to distribute sweets among more than 1200 soldiers and officers of the Army and Border Security Force on the occasion of Deepawali to assure the soldiers that nation was them while they were guarding the borders of the country from enemy during Diwali.

The team was received at   by the commanding officer of 25th Battalion The Punjab Regiment and senior officers of BSF at their respective units alongwith officers and jawans of both the forces where the team celebrated Deepawali with the soldiers and thanked them for safeguarding the borders and LoC so that nation an sleep without any fear.

The team members offered sweets, candles and crackers to the jawans so that they can celebrate Diwali far away from their families as whole nation was like their own family and behind them.

Speaking on the occasion TK Ganjoo while extending Diwali greetings on behalf of MHAC and DAV Society said that they went to forward posts only to show solidarity with the jawans and officers so that they feel connected with civilian population for whom they are sacrificing their comforts to safeguard the nation.

Vinod Pandit said that APMCC has always been in the forefront in reaching out to forces and this was yet another occasion when they joined hands with MAHC and DAV to celebrate Diwali with the jawans.

Ms Satish Sharma while extending greetings on behalf of her school, staff and students told the jawans that nation feels obliged by their sacrifices and they were happy when they get such opportunities to show solidarity with the security forces adding the school has always been organising such programmes.

King C Bharati while addressing the jawans and officers on behalf of Kashmiri Pandits said that Kashmir Pandit community was very thankful to the army, BSF and other security forces for fighting for their cause in Valley as well as on borders adding it was that love, affection and gratitude that they got together to celebrate this year’s Diwali with security forces in view of the escalating tensions on LoC and Borders for which such an occasion was a way to show solidarity and gratitude towards the forces.

The team was also joined by the staff of MHAC, and Akhnnor school besides other civilians.