LAL DED – THE AGONY AND THE ECSTASY 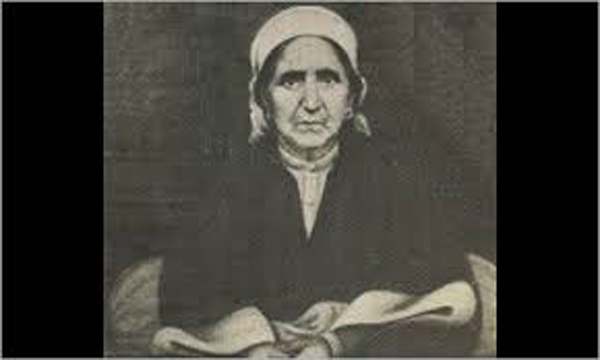 They may abuse me or jeer at me,

They may say what pleases them,

They may with flowers worship me.

What profits them whatever they do?

I am indifferent to praise and blame.

Such a one was Lal Ded – so intoxicated by her love for the Almighty that the actions and reactions of fellow-humans did not bother her. Having completed her chores at home, she would run again and again to the nook across the river to be with Him – her eternal beloved – and in solitude, she shared her thoughts with this Friend till He and she became one and then, life was just one long experience of ecstasy.

It is difficult to establish the History of her life but the story is very simple. In the early or the middle of the fourteenth century, she was born in a Brahmin family living in the village Sempor or maybe in Pandrenthan (ancient Purandhishthana, the old capital). As a child, she showed extra-ordinary traits of piety and religion. She was probably married off at the age of 15 or 18 where she lived for about twelve years before she left her hearth and home either as a result of the insufferable treatment by her step-mother-in-law or in response to the spiritual call from within to renounce the world. She left for her heavenly abode at the fairly advanced age of over 70 years.

The twelve years of married life is that traumatic period during which she, perhaps, advanced the most inwards. The agony consisted the step- mother-in-law’s serving her a thin layer of cooked rice placed upon a lump of stone. Padmavati, the name given to her after her marriage, quietly ate her food and silently washed the stone and plate and placed them back in the kitchen. She also tolerated the taunts regarding her solemn looks and her staying aloof of the neighbourhood gossip unlike the other married girls of her age. Inspite of her proficiency in spinning yarn on the spinning wheel, her parents were blamed for not having taught her anything except the art of whiling away her time at the river-side. She was told that God had punished her with barrenness because she was not loyal to her husband.

It was this sly accusation of her infidelity to her husband that brought her married life to the hilt. The husband had felt dissatisfied with her frigidity towards him and mistook this Mira-like behaviour for conjugal infidelity as insinuated by his step-mother. Then one day, in a fit of rage he stood at the door and as Lalla entered the compound of the house, he struck the pitcher of water on her head with a stick demanding to know about the tryst she had kept with her paramour across the river. 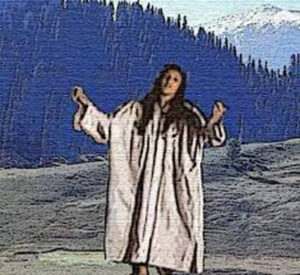 The earthen pitcher broke into pieces but the water in it stood frozen on her head till she filled all containers in the kitchen and then threw what remained of it outside where it collected in the form of a pond – the spot even today known as ‘Lalla Trag’.

This miracle unmasked the spiritual radiance of Lal Ded. People thronged to have a glimpse of her. The time had come to leave home and wander and sing His praise and dance to His tune alone. No more the social and cultural strings for her but only the nectar of His Divine Name.

Thou wert hidden from me,

When I saw Thee in my self,

Then Thou and I,

In ecstasy enjoyed ourselves.

Lal Ded moved into this new phase of existence smoothly and life flowed on to its destined end of mingling with the Ultimate. Undaunted by the surroundings, she moved beyond prescribed rituals and ceremonies and the worship of idols. She moved onwards affirming the presence of the One Divine Light and upbraiding those who were engrossed in material pursuits. The wandering ascetic had already displayed the one important virtue – patience under all circumstances – and now she explained in verse the foundation of that quality – Faith. Her poetic exclamations known as ‘Vaakhs’ enshrine the beauty that remains concealed within each human being, ever-ready to be awakened by ‘Sabar’ (patience) and ‘shradha’ (faith). She – a Sufi – spoke of Him as Pure Light, Total Joy and The Peace that passeth understanding. It is His Grace alone that can liberate man provided he has the faith. Her definitions were:

to face darkness at noon,

to go through a grinding-mill,

Many legends have been associated with her. Each incident relates her utter involvement with God and proves that He alone Is – the Truth – whereas all else is nought. The common folk recognised her as one chosen by God and though born a Hindu, the muslims chose to own her and call her ‘Lalla Arif’. It is believed that Shah Hamadan, Lal Ded and Nund Reshi would often meet to converse on spiritual subjects but, as already pointed out, the chronicles maintained by the great historians do not corroborate these instances.

Through centuries, from generation to generation, the story of Lal Ded, affectionately called ‘Lalla Moj’ (Mother Lal) has travelled to create in people the awareness of the omnipresence of the Almighty One. It is said, once her Guru, Siddha Shrikantha, led her out of the temple, where she went to ease herself, to a spot some distance away. She scratched the ground and unearthed idols and asked him to show her a place where God did not abide – where her “Shiva” was not present. 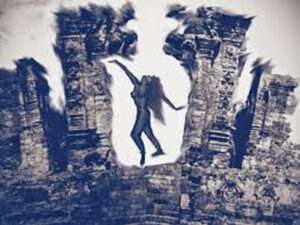 There is an anecdote regarding a time when she stood nude amongst spectators at an open-air performance in Pampore. She was reprimanded by her father-in-law who happened to be there and who led her away to cover her with clothes. She protested that there were only sheep and goats about her and not a single human being. The father-in-law looked at the crowd and actually saw only the animals she had mentioned. This is to stress that those who are lost in the ‘Maya’ (Myth) of the world are like animals while as only the one who lives in the awareness of God is truly a man. The man lives, these animals die. The man holds his senses in control and enjoys peace of mind. He will not die nor be slain.

Who dies? Who is slain?

He who forsakes God’s Name

and gets involved in worldly cares.

Lal Ded was very practical. Once when the street urchins were teasing her by calling her “Lalla Mat” (mad Lalla), a man came and chased them away. A shop keeper, watching the scene, asked her why she had not scolded the children and whether she had felt happy that someone had chased them away. She did not reply immediately but asked him to give her a piece of cloth. She cut it length-wise into two equal pieces and placed each length on either of her shoulders. Then she sat there quietly knotting one piece when someone showed respect and the other when someone hurled an abuse at her. In the evening, she told the shop keeper to weigh the two lengths which obviously weighed the same, irrespective of the number of knots in either of them. “This is the right way to live life”, she said. “Neither allowing abuse to hurt nor praise to inflate ego.”

The beloved of the masses – Lal Ded – having thus spent about forty years amongst the people, silently approached the moment of her Union with God. She had endeared herself to the common folk for she had spoken to them in simple words and actions and in their own language – Kashmiri. Her crossing over to the Other Shore is as legendary as her life. Some say the end came behind the wall of the Jamia Masjid in Vejibror (Bijbehara) and others say she enclosed herself between two tubs and just disappeared. Whichever be true, the fact is that there is neither a “samadhi’ nor a ‘maqbara’ (tomb) to mark the place where her body was laid to rest. Maybe, like Saint Mira she lived and like Saint Mira she disappeared only to be remembered for her ‘Bhakti’ (worship).

“Life and death to me are alike,

No harm can come to me,

He knows me from beginning of time,

And He loves me.”