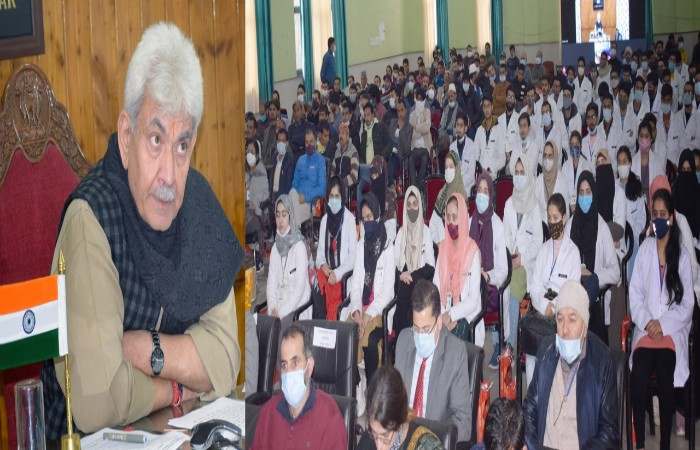 With advanced, upgraded health infra & affordable health services to all, we are determined to fulfill the vision of a new & healthy J&K: LG

MBBS seats have been increased to address shortage of doctors in J&K: LG

· New Healthcare Investment Policy-2019 has been approved to attract investors

Addressing the gathering through virtual mode, the Lt Governor congratulated the aspiring doctors and advised them to serve humanity and imbibe the spirit of selflessness.

Speaking on the efforts being made by the UT Government for the development of the health sector, the Lt Governor observed that J&K Government is taking several reformative measures for the advancement and upgradation of health infrastructure, besides providing affordable healthcare services to all.

We are determined to fulfill the vision of a new & healthy J&K, said the Lt Governor.

Terming the healthcare sector as imperative for the development of J&K, the Lt Governor observed that J&K is spending 2.86% of its GSDP on public health, which is the best in the country. Special attention is being paid to three areas – Prevention, Better Treatment, and Care, he added.

The Lt Governor also termed the role of medicine students important in strengthening the healthcare system of J&K.

The Lt Governor further underscored the significant measures taken by the Government of India under the leadership of Hon’ble Prime Minister Shri Narendra Modi for bringing reforms in the health sector of Jammu and Kashmir.

Five new medical colleges, two AIIMS, nearly 1000 healthcare and wellness centers, five new nursing colleges, BSc paramedical course as well as more than 100% increase in medical seats are contributing towards the development and advancement of the healthcare sector in the UT, he added.

Tendering process for establishing two new medical colleges in Udhampur & Handwara, at an estimated cost of Rs 325 crores each, has been started which will lead to tremendous health security improvement in remote areas, maintained the Lt Governor.

The Lt Governor also appreciated the Health department and the team for making dedicated and committed efforts in bringing J&K among the States / UTs with the best health indicators and health index across the country.

The Lt Governor also mentioned the PMJAY-SEHAT which was launched by the Hon’ble Prime Minister recently and is covering 100% of the population without discrimination.

In a major step towards addressing the issue of shortage of doctors in Jammu and Kashmir, the Lt Governor maintained that with the formation of five new medical colleges, 500 additional MBBS seats have been added this year, and their number has now doubled in Government Medical College, out of which 85 seats are reserved for financially weaker sections.

To overcome the shortage of post-graduate doctors and to prepare specialists at that level, our Health Department has also started Diploma of National Board Courses in the new and old medical colleges of the districts, which will increase at least 250 seats, added the Lt Governor.

Speaking on upgradation of health infrastructure, the Lt Governor observed that the new medical colleges have been upgraded by attaching them to the District Hospitals, which will be equipped with all facilities, and soon the existing 300 bedded hospitals will be developed into 500 bedded hospitals.

To promote AYUSH care services, two AYUSH colleges – Unani and an Ayurvedic college have been started. Facilities of AYUSH are also being provided to 571 Stand Alone Dispensaries, he added.

Jammu and Kashmir has received Rs 881 crore for 140 health projects under PMDP out of which 75 projects have been completed and 26 projects will be completed by March this year, said the Lt Governor.

World Bank is providing financial assistance of Rs 367 crore to Jammu and Kashmir, which will further strengthen the health care institutions here, he added.

While speaking on attracting investors in the healthcare sector, the Lt Governor observed that the new Health Care Investment Policy-2019 has been approved and the operational guidelines of this policy, besides proposal of two medi-cities in the UT are being considered which will prove to be milestones in this area.

The Lt Governor expressed his satisfaction on being informed that the Doda Government College has gathered adequate facilities for the education, training of all the students and will be able to serve around 12 lakh people in the coming days, including the surrounding districts. A total of 56 faculty have joined this medical college and by June 2021 its main complex will also be ready, it was informed.

The Lt Governor assured that the issue of availability of senior faculty in Anatomy and Radiology, will be resolved soon.

The Lt Governor congratulated the Principal and faculty members of GMC Doda for commencement of the first batch of the college. It’s a matter of great satisfaction that out of 100 students in the first batch, 50 are girls, he added.

Speaking on the occasion, Union MoS PMO, Dr. Jitendra Singh termed the occasion as a historic moment. He said that the dream of establishing Government Medical College in the district and beginning of the maiden academic batch of the college has turned into reality due to the efforts of the central government under the able leadership of Hon’ble Prime Minister and assured all possible help in providing quality education to the students.

He said that promises made by the Prime Minister with the people of J&K are being fulfilled for holistic and equitable development of the UT.

Rajeev Rai Bhatnagar, Advisor to the Lt Governor, also spoke on the occasion and extended his heartiest congratulations to the newly enrolled MBBS students and faculty members of the College.

On the occasion, Atal Dulloo, Financial Commissioner, Health and Medical Education Department highlighted the achievements made by the Health Department in the recent past.

College Magazine titled ‘Chenab’ was also released on the occasion.