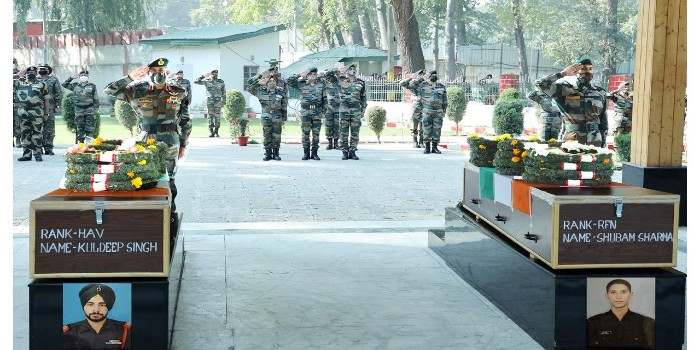 Lieutenant Governor, Manoj Sinha has paid tributes to Rifleman Shubham Sharma of 8-JAK RIF who attained martyrdom during Thursday’s unprovoked ceasefire violation in Naugam sector, Kupwara.
“Rifleman Shubham Sharma has laid down his life in the service of the nation. The nation is indebted by his sacrifice. We are proud of our Armed Forces and we stand strong in their support.” The Lt Governor remembered the young Jawan whose mortal remains reached his hometown, RS Pura, Jammu today.
The Lt Governor also paid tributes to Havaldar Kuldeep Singh of Unit 15 SIKH LI, who attained martyrdom in the same incident. He prayed for the speedy recovery of four other Jawans who were injured in the incident.