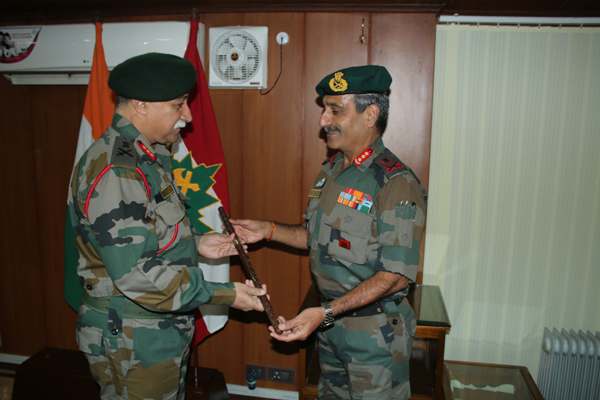 Commissioned into the regiment of 5th Gorkha Rifles (FF), Lt Gen Sandhu has had an illustrious military career spanning 36 years during which he has held varied prestigious command, staff and instructional appointments. The Gen officer has an incisive understanding of J&K having served five earlier stints in the state including command of an Infantry Battalion on the Line of Control, a Mountain Brigade and the elite Kupwara Division.

A Graduate of the Defence Services Staff College (DSSC), Higher Command Course and National Defence College, Gen Sandhu has also served in the Army Headquarters, Infantry School, Army War College and the DSSC. The Gen officer has also represented the country in the Indian Embassy at Kathmandu, Nepal. On assuming the charge, Gen Sandhu conveyed his greetings to the Awaam of Kashmir and the entire Chinar Corps fraternity.

Earlier in the day, Lt Gen Satish Dua was given a befitting farewell in Badami Bagh Cantt which began with both the Gen officers laying wreath at the War Memorial to pay their homage to martyrs. Gen Dua’s tenure, which began on 27 Aug 15, has been “characterized by a balanced approach of robust operations along the LC and in hinterland on one hand, and constructive engagement with the populace, especially the youth on the other”.