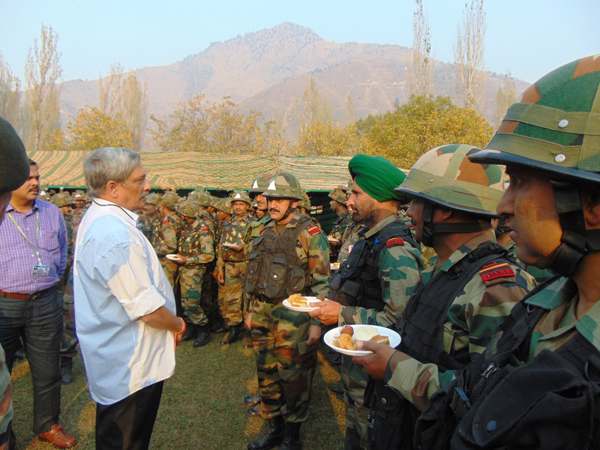 Defence Minister Manohar Parrikar and Army Chief Gen Dalbir Singh today  jointly reviewed  the security situation  in the light of the increasing skirmishes on the Line of Control that has claimed substantial number of lives of soldiers and civilians in  the past fortnight.

Eight civilians were killed on  Tuesday itself

A release by the  15  Corps here said  that the minister and the army chief first visited the frontier area of Uri where they were briefed by the local Commanders in the presence of Northern Army  and Chinar Corps Commanders Lt Gen DS Hooda and Lt Gen JS Sandhu respectively.

It was in  Uri about 110 km north of Srinagar where terrorists had mounted  an attack in  the wee hours of September 18 and killed 19 of them and  injured several others.  The surgical strikes carried out by the Indian army on September 29th    were to seek  revenge on the terrorists across the LoC.

The surgical strikes  in  which , according to the Director General of Military Operations  Lt. Gen. Ranbir Singh had inflicted heavy losses on the “ terrorist launch pads in  Pakistan occupied Kashmir”  Pakistan had denied that and said that it had lost two soldiers in the cross-border firing by Indian army.

It was first visit of  Defence Minister to  Uri after the surgical strike. He  also interacted nteracted with the troops deployed in the forward areas over tea.

“While complimenting their valour and fortitude, which he said was the entire nation’s pride, he also impressed upon the soldiers to remain in a very high state of alert to give a befitting response to any misadventure from across,” the release said.

Later,  he and and Army Chief were briefed at BB Cantonment in Srinagar on the latest internal security situation and all the security measures initiated by the Army and other security agencies along the LC as well as the hinterland.

The focus was on the growing radicalization  of the youth and the increasing number of the local militants, the sources said.

The Defence Minister  will be staying in Srinagar overnight and meet more troops deployed in other areas tomorrow.