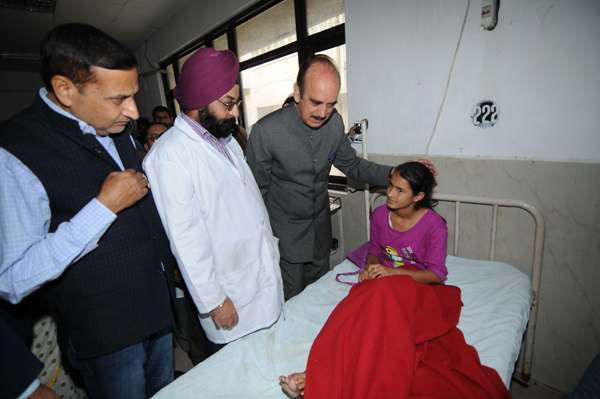 Leader of opposition  in Rajya Sabha  and senior Congress  leader Ghulam Nabi Azad   blamed the  Narendra Modi government for  the flare up on borders  and the deteriorating  situation in the Valley , saying the  BJP had no policy to  bring  peace in this sensitive state.

Azad arrived here this morning  to enquire about the condition of the injured in the Pakistan firing in border villages  was speaking to the  media . He was critical of the NDA government but kept silent on the role of Pakistan  in promoting terrorism in Jammu and Kashmir or cross border firing .

The leader of the opposition ‘s visit had come in  wake of the  recent cross-border firing in which eight civilians  were killed and 25 others wounded on  Tuesday . He felt that  the surgical strikes were okay but the NDA has tried to “appropriate its success by politicizing  it. This should not have been done .  This is not good.”

According to him the border skirmishes had resulted in  the  losses on both sides of the border in terms of human lives , cattle and there is a threat of greater economic loss as the paddy fields have not been harvested as yet.

Azad repeated his old theory that the PDP-BJP government was  “ unacceptable to the people of Jammu and Kashmir”  and that’s why there was “ whole trouble in Kashmir where more than 90 lives have been lost, thousands injured and  several schools burnt.”

“ It is all because of the PDP-BJP government in the state,” but he  did not say anything regarding the role of the separatists in igniting and fuelling the agitation in Kashmir.