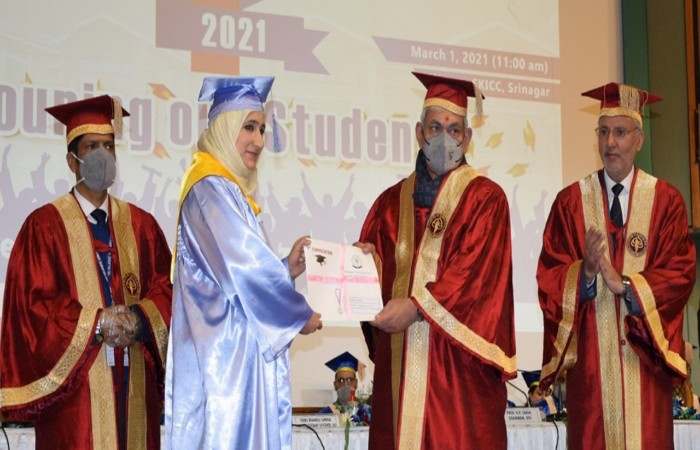 The Lt Governor was speaking during the 1st Convocation of Islamic University of Science and Technology (IUST) Awantipora, held here at SKICC.

During the convocation, as many as 7000 meritorious students, including 163 Gold medalists were awarded degrees. In addition to this, 14 scholars were also awarded Doctorate and M.Phil Degrees.

Speaking on the occasion, the Lt Governor, who is also the Chancellor of the University, congratulated the graduating students and gold medalists for their academic performance, and faculty members for shaping the young minds. He also extended his best wishes to the proud parents and family members.

The Lt Governor said that the government is according high priority to the Education sector. He observed that the students of Jammu and Kashmir have high potential which is evident from the large number of students entering higher education institutions. He called upon the student community to dedicate themselves towards building AatmaNirbhar Jammu & Kashmir.

In his address, the Lt Governor stressed on the need to encourage innovation at the University level through Outcome-based Education, so that the network of science and management firms, research institutes, technology firms, technical services would also be added to it in future.

Emphasizing on strengthening of College-Industry connect, covering the Skill Gap, enhancing Industry Exposure and project-based experience while studying, the Lt Governor underlined the importance of developing the capabilities and skills of the youth to prepare them for the modern global market trends.

Competition can be fought only through innovation in every field. Education does not just mean information and learning. It is important for all of us to understand that education means invention. To become the most powerful country in the world, we have to engage the new generation into creative work, the Lt Governor maintained.

Speaking on the importance of imparting moral values, the Lt Governor observed that along with science and technology, our traditional sacrament values also needed to be promoted in educational curriculum.

New Education Policy stresses on making Education process holistic. Education is not about a race to come first but it is about achieving the highest peak of values in life, added the Lt Governor.

The Lt Governor also laid emphasis on developing a Student Centered Instruction Model to measure the performance of students and improving the quality and efficiency of graduating students as per the modern day industry requirements.

He said that the goal behind imparting science, technology and management studies in the Higher education, is to make the country do better than other countries in the field of sustainable technology and to ensure socio-economic needs are met through innovative ideas at the grassroots level, besides building scientific and technological capacity for nation building, which can meet the challenges of present and future.

The Lt Governor underscored the significance of creating value addition in the field of education as per new Education Policy, wherein promising students of science, technology and management can contribute as per the needs of changing times.

While mentioning a report of Competitiveness ranking of the World Economic Forum which assesses the potential of the economy in the countries of the world, the Lt Governor observed that technology-based industrial development can be sustained only through sustainable innovation systems, which is a system to convert knowledge into wealth.

The Lt Governor said the future professionals are today’s IRC Students – Intelligent, Reflective and Compassionate Students who should work as Engine of Development and Innovation in all fields. We have to give them a platform that can support them more in their research, he added.

While addressing the young students and scholars, the Lt Governor advised them to come out of the Theory-based mentality that we call ‘college bubble’ and adopt themselves with changing times.

The intensity of search decides the outcome. It is the fire of quest that decides the birth of a new invention. Our primary focus should be the creation of individuality and turning the student into a powerful independent thinking individual. This will provide a solid base and a unique structure for innovative ideas, observed the Lt Governor.

Speaking on the revolution in the industrial sector, the Lt Governor observed that the scale and scope of technological change in the Fourth Industrial Revolution (Industry 4.0), will be unprecedented and many new technologies like Artificial intelligence, Robotics, Internet of Things, Autonomous Vehicles, 3-D printing, Nanotechnology, Biotechnology, Materials Science, Energy Storage, Quantum Computing, will give rise to many jobs and possibilities of self-employment.

With holistic education along with Artificial Intelligence, the new generation can successfully meet all the challenges, he maintained.

The Lt Governor congratulated the Vice Chancellor, members of Executive and Academic council, faculty and staff on having built a great reputation for IUST as a premier science and technology University, in Jammu Kashmir and the Country, within a very short span of time.

He asked the IUST to prioritize the setting of new standards in education and creating top class facilities for students. Research in the fields of Alternative sources of energy, new technologies in construction etc require the attention of the University, he added.

The Lt Governor urged the parents to develop a powerful personality in their children. He also urged the teachers to maintain harmony among the students and make the new generation aware of their duties along with Fundamental Rights. He also made special mention of the girl-students for outperforming the boys and bagging maximum gold medals.

Quoting Former President and great educationist Dr. S. Radhakrishnan, the Lt Governor said that the teacher remains a student throughout his life. Therefore not only they have to learn new things, new skills and new knowledge, but also inculcate it among the students, he added.

Terming Convocation as a new beginning for the passing out students, the Lt Governor said that youth have a tremendous responsibility on their shoulders and asked them to contribute for peace, progress, prosperity and people centric innovations.

He gave a detailed overview of the placements and publications brought out by the University, research projects sanctioned to the faculty, various workshops and conferences that have been organized in the recent past.

He said that University is striving hard to be a centre of excellence, besides developing and cultivating critical acumen among students. The University aims at shaping the personality of the students, infusing in them a sense of responsibility as constructive members of the society, he added.

Registrar IUST, Prof. Nazeer Iqbal delivered the Vote of Thanks.