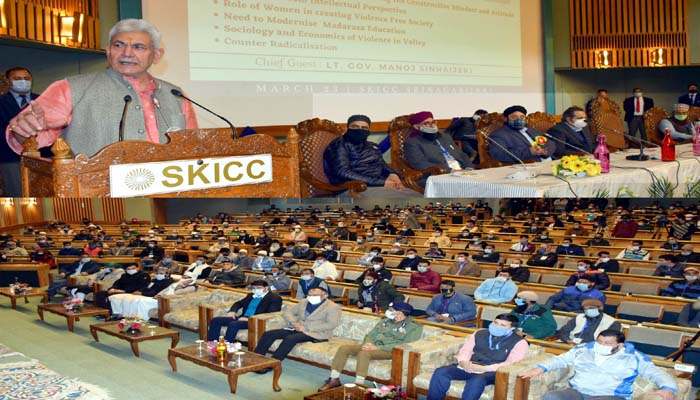 Calls upon community elders, religious heads to spread the message of Peace & Harmony

Youth of J&K possess immense talent; UT administration is putting in all-out efforts to provide them with rightful opportunities: LG

Lieutenant Governor, Manoj Sinha today urged the community elders and religious heads to spread the message of Peace and Harmony among the new generation.

The Lt Governor was speaking during the “Confluence of Religious Leaders in Kashmir” Conference which was held here at SKICC.

Terming the Conference as a historic moment for Jammu and Kashmir, the Lt Governor appreciated the efforts being made to discuss the role of religious leaders and women in creating violence-free society, Counter-Radicalization and modernization of Madrassa education.

Jammu & Kashmir has remained home to diverse religious and cultural influences which deeply enriched its pluralistic ethos. No development and progress is possible without sustained peace, communal harmony and brotherhood, said the Lt Governor.

The Lt Governor emphasized the need for restoration of the pristine glory of J&K as an abode of peace, amity, communal harmony and brotherhood and urged the people to come forward in achieving this goal.

“Violence has no place in any civilized society and peaceful co-existence is the best means to resolve problems”, he added.

While addressing the issue of counter radicalization, the Lt Governor urged community elders, religious heads and torch bearers to spread the message of love, peace and tolerance among the youth.

Radicalization should not be associated with a specific religion. There is a need for Islamic Scholars to formulate a policy and a process by which a helpless person, who is exposed to a violent ideology, is prevented from getting radicalized, said the Lt Governor.

The Lt Governor also highlighted the significant role of family, community influencers, religious and spiritual heads in the counter-radicalization process to thwart any attempt being made from across the border to incite communal hatred in the society.

He further urged the religious heads and women to play an active role in prevention of drug addiction.

On social media based propaganda, the Lt Governor called upon all the stakeholders to make collaborative efforts to check the violent ideology and propaganda being spread on social media by certain groups in radicalizing our young population.

Although, the level of radicalization is comparatively much lesser in Jammu Kashmir, it is very important to focus on counter-radicalization for ensuring social harmony and national security, added the Lt Governor.

The Lt Governor further underlined the important role of mainstream media to counter such elements and extremist ideologies.

These efforts are not written ideologies or some philosophies but it is about humanness and helping the personality of an individual to grow in the right direction, the Lt Governor maintained.

Many people distorted the message of Islam and apart from Maulana Wahiduddin Khan, there are many clerics and khatibs who raised voice against deliberate distortion and misinterpretation of the selected portion of Islamic texts. There is a need to check propagation and wrong interpretation of texts from holy books, besides realizing our responsibilities to show the right way and direction to the one who is treading a wrong path, said the Lt Governor.

The Lt Governor termed Jammu and Kashmir as an ocean of spirituality. Here the values of humanity and tolerance emanating from the united culture of Shavisim, Buddhism and Sufism have always flourished over the centuries, he added.

He made special mention of Sufi saint Farid and Adi Shankaracharya and asked the people to spread their message of humanity and love.

If you see any religion of the world, it teaches us only two paths – the paths of meditation and love. The problem arises when the original values of the religion are ignored and the spirit of love, kindness, compassion, renunciation which develops the ‘Sarva Dharma Sama Bhava’ and communal harmony is harmed.  It is our responsibility to correct the wrong rhetoric and misinterpretation to preserve the feeling of love and harmony, said the Lt Governor.

Many cases have come up in which even a very educated person gets radicalized. We need to counter radicalization through Sufi tradition, religious heads and Mothers and sisters without any particular sect, added the Lt Governor.

Speaking on the immense talent and potential possessed by the youth of J&K, the Lt Governor said that under the guidance of the Hon’ble Prime Minister, the UT administration is putting in all out efforts to provide them with rightful opportunities.

Highlighting the reformative measures being taken in the education sector by the government, the Lt Governor said that from this session, education will be imparted in all 5 official languages. Translation of local folklores and those of other states for cultural exchange and understanding is being done to promote the spirit of “Ek Bharat, Shreshtha Bharat”.

The stories of courage and sacrifice of our role models like Brigadier Rajinder Singh, Maqbool Sherwani and Women Self Defense Corps,would be told in schools, he added.

Speaking on tremendous work being done for modernization of education, the Lt Governor observed that Vocational courses have been started in all schools from class 9th in accordance with the suggestions of the new National Education Policy. Apart from this, vocational training is being provided to 44,351 children in 715 schools under the Samagra Shiksha Abhiyan, he added.

Underscoring the initiatives taken for strengthening the skill development and entrepreneurship ecosystem in J&K, the Lt Governor said that in the last two years, revolutionary measures have been taken to channelize the young energies into the right direction.

The Government has signed an MoU with the Bombay Stock Exchange to provide banking, finance and stock market training to the youth through the Mission Youth program. Under the Pradhan Mantri Kaushal Vikas Yojana, two CIIIT centers have been set up in Baramulla and Jammu in collaboration with Tata Technologies. Under the Himayat program, young boys and girls are being provided employment.

During the last 6 months, 17,800 young boys and girls from all  panchayats of Jammu and Kashmir have become entrepreneurs and are also providing employment to other people of the villages.

An unprecedented Rs 28,400 crore New Industrial development scheme was announced that will provide employment avenues and opportunities to around 5 lakh youth.

Moreover, the work done during the last 18 months in the field of Skill development and Medical Education, was not done in the last 70 years, he added.

In the next two years, we aim to ensure that no house is deprived of electricity, water and access to roads, the Lt Governor maintained.

“I am confident that the Young Generation will contribute significantly in making Jammu and Kashmir the most developed region in the country”, concluded the Lt Governor.

Speaking on the occasion, Moulana Muzaffar also stressed on the need to put a special focus on misrepresentation of Islamic teachings further adding that the certain elements within the community are distorting the Islam’s message for peace, love and harmony.