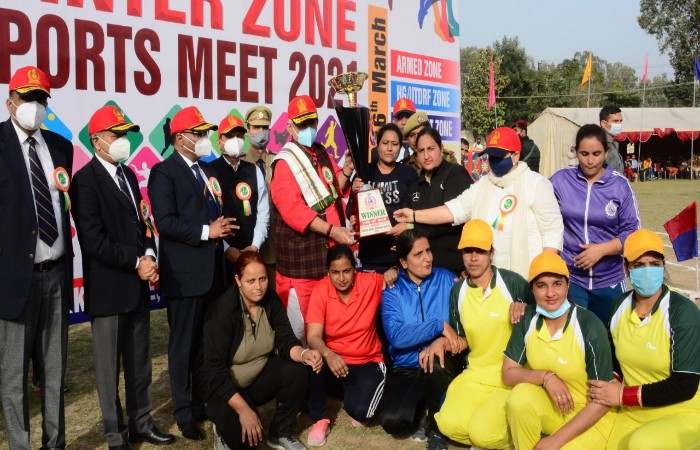 JKP is the most efficient and trained police in the country: Lt Governor
“We are proud of our police personnel who are doing commendable job in ensuring safe & secure environment for the people of J&K: LG
Courage of our JKP personnel is inspiration for all, says the LG
LG asks Police Personnel to be Future-ready; adapt themselves to changing times
Appreciates J&K Police for promoting sports activities in the UT
• Armed Zone came out as overall Champions with 54 Gold medals

Jammu and Kashmir Police is the most efficient and trained police in the country. JKP has always remained at the fore-front for maintaining law and order and in times of crisis. The courage of our JKP personnel is an inspiration for all.

Lieutenant Governor, Manoj Sinha made these remarks during the closing ceremony of Inter-Zone Sports Meet-2021 of JKP held here at Gulshan Ground.

Speaking on the occasion, the Lt Governor observed that the professionalism and commitment of JKP Personnel stands out when it comes to Law enforcement and Anti-terror operations.

“We are proud of our police personnel who are doing commendable job in ensuring a safe and secure environment for the people of J&K, besides discharging their duties with determination and commitment during COVID-19”, said the Lt Governor.

The Lt Governor appreciated J&K Police for promoting sports and cultural activities in J&K by organizing many activities like Pedal for Peace, Cycling race, Jashn-e-Dal, Cricket tournaments and many more under Civic Action Programme.

He congratulated all 983 police personnel from all the zones who participated in 23 disciplines during the 4-day long sports meet.

Encouraging the youth to take up sports, the Lt Governor observed that sports is a metaphor of life. In sports, participation is important, winning or losing doesn’t matter. Never let yourself down with a defeat, as defeat is the first step towards victory, he added.

Such events provide a solid platform to channelize the energy of youth towards productive and constructive activities, besides recognizing their talent, the Lt Governor maintained.

I believe that JKP will perform exceptionally well in the upcoming All India Police Games, said the Lt Governor. He also made a special mention of JKP’s Dronacharya Awardee, Kuldeep Handoo.
Speaking on future challenges, the Lt Governor advised the police personnel to be future-ready.

Besides conventional warfare, the police personnel have to tackle new challenges that can only be overcome by strengthening institutions and public relations, spreading awareness among the people about disinformation in the digital world, working on technological convergence and facing hybrid war-fare, said the Lt Governor.

It is the vision of Prime Minister, Narendra Modi to make the police force ‘SMART’, which is Strict and Sensitive, Modern and Mobile, Alert and Accountable, Reliable and Responsive; Techno-savvy and Trained, maintained the Lt Governor.
Police is always there to serve people while facing traditional as well as modern challenges.

Technology is changing rapidly. Adapt yourself with the changing times as new generation warfare needs an action oriented approach for its effective monitoring and quick response, the Lt Governor asked the Police personnel.

The Lt Governor maintained that in coming years, policing needs to be done on a two-tier system as everyday life will be connected with the internet. Focus must be given on automation for speed and accuracy, he added. He also stressed on the need for effective investigation and conviction of criminals.

The Lt Governor further called for taking timely measures for the welfare of the police personnel and their family members.

Speaking on the ongoing “Azaadi ka Amrut Mahotsav”, the Lt Governor urged the police personnel to play their important part in the celebrations of the national festival.

Remember the martyrs of JKP who laid down their lives in the line of duty and pay homage to them. The stories of the valour of JKP personnel, their exemplary work, selfless service and human-side must reach to every individual, observed the Lt Governor

The Lt Governor concluded his speech by declaring the Inter-Zone Sports Meet-2021 closed.
In his welcome address, DGP, Dilbag Singh gave a detailed briefing of the sports event. He informed that six zones of J&K Police participated in this sports meet. He also informed that, soon a film on JKP would be made for documenting their work.
Earlier, the Lt Governor took the salute at an impressive March Past by Men and Women contingents.

The Lt Governor also witnessed the finals of tug of war of women and men’s category which were played with competitive sportsman spirit by the teams.

The Lt Governor and other dignitaries presented the mementos to the winning teams.
During this year’s Inter-Zone Sports Meet, Armed Zone came out as overall champion with 54 gold medals, 53 silver and 48 bronze medals taking the tally of medals to 155.