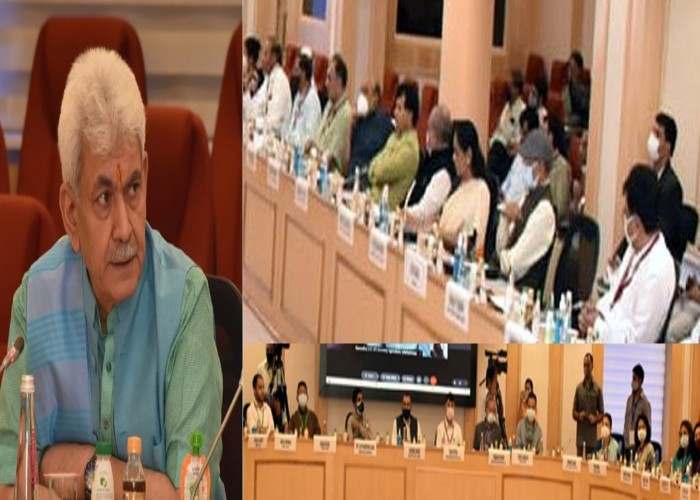 Speaking on the occasion, the Lt Governor shared J&K’s perspective on the broad approach of the UT Government taking Agriculture and allied sectors on the path of sustainable and inclusive growth.

We have created an enabling environment for transforming Agriculture and allied sectors of J&K to increase the income of our famers in line with the National targets, create jobs, ensure food security, speed up the economy and enhance the contribution of agriculture and allied sectors in the Gross Domestic Product of the UT, observed the Lt Governor.

The Lt Governor highlighted the reformative interventions made by the government leading to sweeping changes in J&K’s Agriculture sector during the past one year.

We are working on an integrated approach. From reducing input cost & increasing quality at pre harvest stage, facilitation of our farmers to link them with domestic and international markets has become a new normal, the Lt Governor said.

Consistent efforts are being made to diversify the agriculture by bringing in credit, technology, extension to step up present growth rate; besides building capacities of farmers together with creating entrepreneurship; encouraging High Density Plantation; extending agricultural mechanization support and developing Market infrastructure.

The growth potential of Agriculture and Horticulture sector has started finding interest among potential investors. Our progress in the sector has now attracting markets and entrepreneurs from outside J&K, added the Lt Governor.

While listing out the support extended to the farmers for getting maximum returns, and facilitating Market Linkages of the local produce, the Lt Governor said that the low remunerative crops are being replaced with the high value cash crops. There has been a massive increase in the cultivation of organic and exotic vegetables during last two years. For the first time, more than 2000 truckloads of vegetables have been marketed across the country, he added.

Apart from GI tagging of Saffron, J&K administration has made new strides in organic certification of products like Basmati Rice and transportation of perishable products through air cargo to various domestic markets, he observed.
Rootstock is being imported from outside the country for developing High Density Plantation orchards. A new Scheme vis-a-vis ‘Development of High Density Plantation Nurseries’ has been introduced to make J&K Aatmanirbhar in the input support in terms of High Density plants, the Lt Governor said.

Enhanced focus is being laid to stabilize the fruit market of Horticulture produce of J&K and ensure round the year sale of the fruits like Apple on good prices, besides establishment of storage within J&K. During the last one year, 40,000 MTs of storage has been established thereby making available a total of 1.65 LMT of CA storage facilities in Jammu & Kashmir. Also, another 35,000 MTs of storage capacity is under construction, added the Lt Governor.

On the occasion, the Lt Governor sought Rs 800 crore support from the Union Government for Modified High Density Plantation in J&K.
The Lt Governor also highlighted the need for special provisions under existing schemes for establishment of CA stores, more fruit and vegetable Mandis and electronic platforms for the market of Agriculture and Horticulture produce; extending the time period for return of the capital under KCC Scheme from existing one year to three years for Horticulture crop; establishing modern processing and extraction facilities for Walnut on large scale; establishing modern pesticides laboratories; developing irrigation facilities and rejuvenation of more than 1000 Ha of land under National Saffron Mission; establishment of Saffron Park at Kishtwar in Jammu division etc.

He further requested the Union Government for making interventions for protected cultivation in the higher reaches of J&K; encouraging the Olive oil and other oil seed production; supporting the initiative “PARVAZ” with at least 50% of subsidy under the scheme on all major crops and a special support package under Sub Mission on Agriculture Mechanisation (SMAM).

Addressing the conference, Union Agriculture Minister Shri Narendra Singh Tomar stated that benefits of Central Government schemes for Agriculture sector should reach the correct farmers through better implementation in the UTs. Although funds are not a constraint, it is the implementation of the scheme which should be proper, he added.

The Union Minister said that the Agriculture Infrastructure Fund will provide infrastructure facilities at farm gate for small farmers.

During the conference, presentations were given to all UTs by the senior officials of the Ministry of Agriculture and Farmers Welfare on schemes of the Union Government for the benefit of farmers. Schemes of Agriculture Ministry were also explained for better implementation in the Union Territories.

Admiral D K Joshi, Lieutenant Governor, Andaman and Nicobar Island, besides Officials and delegates of other UTs also participated in the discussions.
Among those who attended the conference were Kailash Choudhary, MoS Agriculture and Farmers’ Welfare, Shobha Karandlaje, MoS Agriculture and Farmers’ Welfare, Sanjay Agarwal, Secretary, MoAFW; Navin Kumar Choudhary, Principal Secretary to the J&K Government, Department of Agriculture Production & Farmers Welfare, along with senior officials of the MoAFW and progressive farmers.