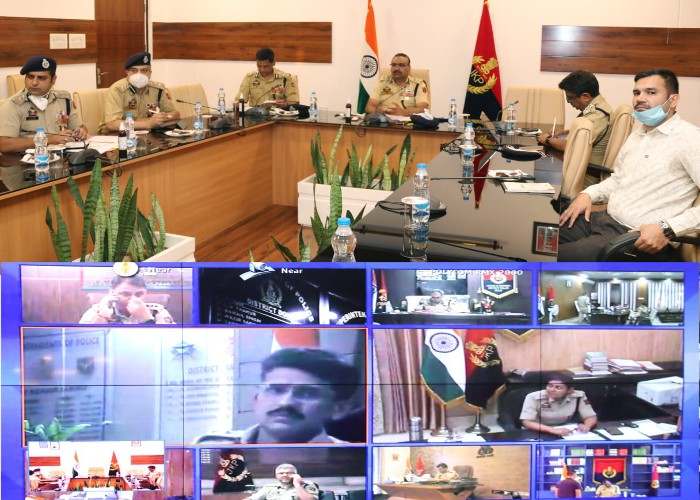 Directs for strengthening of border and highway grids in Jammu region

The DGP complimented the officers for an outstanding understanding with other forces and agencies and for jointly meeting the security challenges successfully.

The DGP while interacting with the officers stressed for further augmenting the intelligence and security grids so that no room is given to the elements inimical to peace in view of the ongoing attempts of infiltration from across the border and increased drone activities by rogue and anti national elements .He said the personnel on the ground should be briefed regularly, and there should be enhanced synergy at the grassroots level for better results. He directed for effective dominance and surveillance in their respective areas and emphasized the need to keep a close watch on subversive elements by strengthening the border as well as the highway girds .He also reviewed the security of the road tunnels in the Zone and gave necessary directions regarding their security. He directed the officers to take review of the preparedness on ground deployments .
The DGP impressed upon the officers to upgrade their investigation quality and interrogation centres.While referring to the Capacity building Programmes with the National Investigation agency , the DGP said that these programmes will go a long way in upgrading the skills of our Investigating officers.

The DGP emphasized on the critical importance of maintaining a sustained close watch on the ground situation and real-time coordination and synergy between different security forces to foil the attempts of elements inimical to peace. He directed to take stringent action against the elements found involved in any anti national or anti social activities. He said that J&K Police alongwith the other security agencies is working hard for the security of the people and for the consolidation of peace and added that those who are looking to cause any damage to the peaceful atmosphere in Jammu and Kashmir would not be spared.

He said that Pak backed terror groups and their associates are continuously attempting to foment trouble in J&K and added that any such attempt would be foiled with fortitude. The DGP emphasized for maintenance of effective coordination and sharing of each and every valuable information so that immediate action is taken as and when required.The DGP added that despite the ceasefire , infiltration attempts are being made.

The DGP J&K gave emphasis on identifying and smashing the OWG networks in the UT.
The DGP J&K impressed upon the officers to identify the personnel indulging in any corrupt practices and take action against them.

The DGP Dilbag Singh said that action against drug peddling is being taken and yet he emphasized on busting the narcotics networks to eradicate this menace from the UT.
Follow up to the decisions and directions of previous meeting was also also reviewed during the meeting.