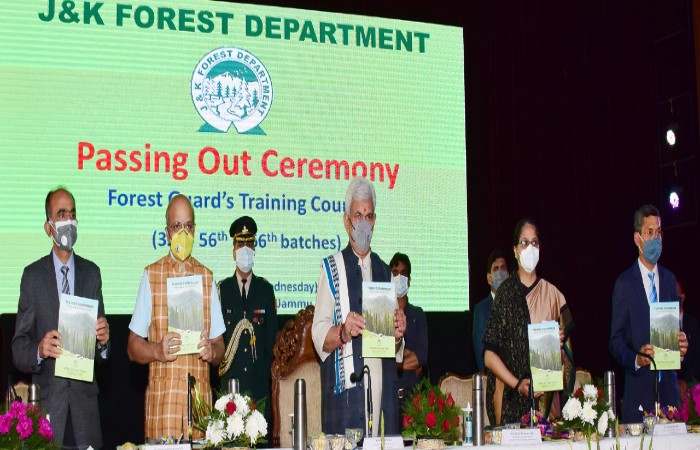 “I salute the bravery of forest personnel working day & night to protect Forests, Wildlife and the Environment”: LG

Congratulates 98 pass-outs; exhorts them to discharge the noble responsibility of conserving natural resources and biodiversity with utmost zeal and dedication

Lieutenant Governor, Manoj Sinha today paid homage to all the martyrs of the Forest Department who have laid down their lives and made supreme sacrifice in the line of duty. “I salute the bravery of forest personnel working day and night to protect Forests, Wildlife and the Environment”, said the Lt Governor.

The Lt Governor was speaking at the Passing out Ceremony of the Forest Guards of 32nd, 56th, and 66th Course here at Convention Centre. The ceremony started with the Guard of Honour to the Lt Governor by the personnel of the Forest Protection Force, J&K.

To mark the occasion, the Lt Governor planted saplings of Rudraksh in the premises of Convention Centre.

During his address, the Lt Governor congratulated the 98 pass-outs and exhorted them to discharge the noble responsibility of conserving natural resources and biodiversity with utmost zeal and dedication.

Emphasizing on extending J&K’s green cover, the Lt Governor called for development of Eco Parks across J&K and establishing more Bal Vans, and green areas specifically for the Senior Citizens, besides comprehensive plan for the conservation of ecology in and around Mansar-Surinsar lakes and protection of wetlands and wastelands.

He also asked the department to focus on Hangul conservation and explore the possibility of making the Dachigam as a more accessible local destination.

Highlighting the role of forest frontline staff in protection and conservation of forests and the biodiversity, the Lt Governor said that Forest Guards are no less than soldiers of our Defence and Police forces. He asked the department to organize programmes on 11th September-Forest Martyr’s Day every year to mark the efforts of frontline staff and pay tribute to their valour and sacrifices.

The Lt Governor appreciated the department on notable increase of forest cover as reported by Forest Survey of India in its 2019 report.

J&K with an increase of 348sq km of forest cover has figured among top 5 States/UT that have registered the highest increase in forest cover. These forests have enabled J&K to receive a higher proportion of funds, around Rs 1700 Cr annually under the 15th Finance Commission. I congratulate the Department for this, said the Lt Governor.

Underscoring the importance of Forests, the Lt Governor said that a nations’ strength predominantly rests in its natural and human resources. In natural resources, India ranks among the top twelve mega-diverse countries of the world and UT of Jammu and Kashmir harbors huge diversity due to its geographic and altitudinal variation, he added.

Speaking on the positive impact of forest products on the economy of the UT, the Lt Governor observed that the monetary value of benefits like timber, firewood, fodder and non-timber Forest Products as assessed by Directorate of Economics & Statistics are worth around Rs 3000 Crore which is more than 2% of the GDP of J&K. Focusing on new avenues like Ecotourism and promotion of Wood-Based Industries, the contribution to GDP can be increased substantially, added the Lt Governor.

On the implementation of the Forest Rights Act, the Lt Governor said that the Government is committed towards the welfare of the communities dependent on forests who were earlier deprived of their rights.

The Lt Governor called on the Forest Department to make various interventions through innovative methods, use of technology and active involvement of people for ecological restoration and conservation.

“I am sure that the Green Jammu & Kashmir Drive with a target of planting One Crore plants will contribute significantly in this direction”, said the Lt Governor.

Underlining the significance of active public participation in protection and conservation of forest wealth of J&K, the Lt Governor observed that the Forest Department with the mandate of afforestation and conservation of forests must actively involve grass root level institutions like Village Panchayats and contribute significantly towards participatory governance in Natural Resource Management.

He asked the department to involve stakeholders like Urban Local Bodies, other line departments, NGOs and civil society in developing green spaces. He further called for establishing Eco Clubs in collaboration with the Education department in this respect to inculcate environmental consciousness.

While addressing the passing out Forest Guards, the Lt Governor asked them to work closely with the people, in villages and in urban areas and be an agent of government to bring improvement in their livelihood.

“Serving for the cause of Forest is a very noble profession as you serve nature to serve humankind. As a frontline staff and first line on the call of duty, your challenges are immense. You have to protect the forests from encroachers, smugglers, poachers and forest fires. You will be entrusted with the responsibility of conserving renewable natural resources and biodiversity, Lt Governor told the Forest Guards.

The Lt Governor observed that with more than half of the area of Jammu and Kashmir under forest and tree cover, the lives of people are closely linked to the forests who expect timely delivery of services such as firewood, fodder and timber. He advised the Forest Guards to prioritize the maintenance of efficiency and transparency while discharging their duties, besides taking care of Wood Based Industries which provide employment as well as contribute to the UT’s economy.

He also expressed his delight to note that the majority of the passing out trainees are Graduates and Post Graduates from diverse educational backgrounds.

Principal Chief Conservator of Forests, Dr. Mohit Gera, speaking on the occasion emphasized on strengthening and upgrading the forestry Training Schools with modern infrastructure and use of advanced technologies in teaching. He also spoke about new initiatives taken during the current year in the training of Forest Guards.

On the occasion, the Lt Governor felicitated the trainees who excelled in academics and extracurricular activities.  He also extended his greetings to the people on World Wildlife Day and World Hearing Day.

Heads of the Departments; Senior Officers of Department of Forests, Ecology & Environment and Forest Guards Trainees also attended the passing out Ceremony.